Mexico: National Meeting of members of The Other Campaign in Atenco 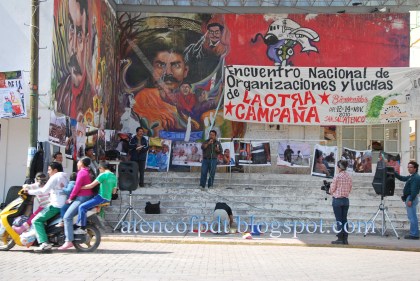 Between the 12th and 14th of November 2010, a National Meeting of Organizations and Struggles of the Other Campaign took place in San Salvador Atenco (Mexico State), convoked by the Movement for Justice en El Barrio, United States and the Front of Peoples in Defense of the Land of Atenco, the latter being the host organization.

The invitation to the meeting noted: “While in the Other Campaign we have strengthened ourselves, we have extended more and have gone deeper in the way we work, the reaction from the capitalist system and from the ‘bad government’ has been to try and crush us where our roots are deep and our resistance is fierce. From the other side of the border, in New York, the movement for Justice in El Barrio strongly felt the chill first and then the anger that emerged from the repression that swept the country during the first phase of the Other Campaign. “ They argue: ” We hope to raise all our differences as flags and walk together to defend our lands, our cultures, our identities, our loves, our autonomy. “

According to press reports, the event was attended by over 70 organizations and groups. During the three days of the meeting there were different workshops, addressing issues such as repression, political prisoners, the defense of land and autonomy, among others, as well as an open forum on “The worthy struggles of Women , Indigenous Peoples, Lesbian, Gay and Transgender. ” In addition, there were screenings of documentaries on different actors and stages of the Other Campaign, as well as on the Zapatista struggle in Chiapas.

For more information (in Sanish):

This entry was posted on Monday, November 29th, 2010 at 5:46 pm and is filed under Atenco, Indigenous people. You can follow any responses to this entry through the RSS 2.0 feed. You can leave a response, or trackback from your own site.