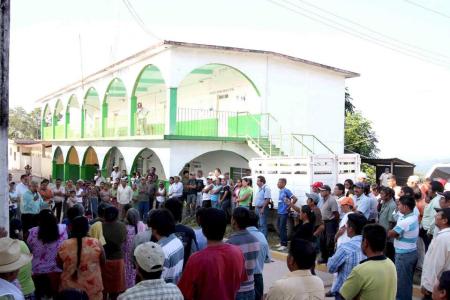 In the last few days were denounced several violent acts in Oaxaca related to the post-electoral context.

On one hand, in the case of the municipaloity of Santiago Yaveo, the State Electoral Institute (IEE) had invalidated the municipal elections governed by the system of uses and customs, because the residents of the agencies (small neighboring villages) had not participated, only those of the city-center.  For this reason, the local congress designated Gerardo Hernández Flores as head of municipal administration for 90 days, while new elections were held.  On 1 January, Flores arrived to Santiago with two aides, and they were all taken prisoner by local residents who demanded that the results of the elections be respected.

On 10 January, the Union of Indigenous Communities of the Northern Zone of the Isthmus of Tehuantepec (Ucizoni) demanded that the state government peacefully resolve the political conflict in Santiago Yaveo and that it not send in police to rescue the kidnapped functionaries.  At the same time the organization signed on to the petition from the Erendida Cruzvillegas Commission for Human Rights which calls for the construction of an accord that would allow a peaceful resolution to the conflict.

In  other news, on 13 January the municipal president of Santiago Amoltepec (a Mixteco indigenous village which is one of the poorest towns of Mexico, located in the region of the Southern Sierra), Luis Jiménez Mata, was killed by unknown assailants after having been shot at least five times.  He had found himself in Oaxaca de Juárez where he had come for his credential as municipal authority before the state government.  Jiménez Mata took up his position on 1 January and claimed to promote a “process of reconciliation” in a zone in which conflicts over land have taken the lives of dozens of people in the last few years.

Officials continue to be held in Oaxaca (El Universal, 11 January)

Police asked not to be sent to rescue five officials in Santiago Yaveo (La Jornada, 11 January)

This entry was posted on Tuesday, January 18th, 2011 at 9:59 am and is filed under Human Rights, Human Rights Defenders, Indigenous people, Land and Territory, Land rights, Oaxaca. You can follow any responses to this entry through the RSS 2.0 feed. You can leave a response, or trackback from your own site.