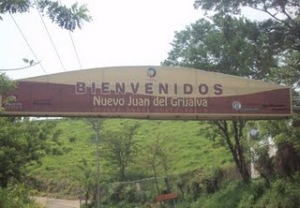 A group of families residing in the first so-called Sustainable Rural City of the world, ejido Nuevo Juan de Grijalva, municipality of  Ostuacán, denounced persecution and harassment on the part of police in response to peaceful protests demanding that the government observe its promises and the payment of debts incurred following the disaster which occurred in the community in 2007.  Eight members of the community and their lawyer have been detained since 13 April in the prison of Pichucalco, Chiapas.  The affected demand their liberty, that their rights be respected, and that the harassment and repression directed by authorities against residents of Nuevo Juan de Grijalva stop.

According to testimony by the affected, the repressive actions began on 17 March past when the ejidatari@s affected by the November 2007 landslides in the community Juan de Grijalva carried out a protest with the end of calling attention to the authorities regarding their situation.  “Once part of the community was reunited,” they say, “some 200 or 300 police invaded.”  The agents “in an arbitrary manner tricked protesters, arguing that payment for lands would be negotiated.”  In exchange, they were taken to the State Attorney General’s Office.

In a public denunciation they announce that “the Sustainable Rural City is merely part of a political euphemism.  It is a term allied with force, because semantically it is an error to make such claims.  It is a lie that the people of Juan del Grijalva now lives better.  In fact we are worse off now.  Now we are persecuted and imprisoned.  Now we are alone, carrying the government on our backs.”  They added that “there there is no work, and for this reason there is nothing sustainable anywhere.  There is not even a tree that would allow us shade fromt he rays of the sun.  We don’t even have a dignified home in which to live.  The houses we were given as homes are nothing more than bricks put together with mud that cause skin conditions, as from these walls are born many species of insects.”

Doctor Gerardo González Figueroa, from t he College of the Southern Border in san Cristóbal de Las Casas, affirmed in an interview held during his participation in the Eight National Congress of the Mexican Association of Rural Studies (AMER) that the worst thing about the Sustainable Rural Cities was not the loss of home or social environment but rather that the forced relocation of campesinos is part of a much larger strategy of counterinsurgency and pacification.  He explained that to abruptly change the setting of rural-dwelling campesinos converts them into factory-workers.  He similarly noted that it would seem that there exist an interest among governments in promoting urbanization, regardless of the risks involved.  Apparently, he added, these projects cover basic services but also converts campesin@s into docile actors, accepting the new governmental “policies.”

This entry was posted on Wednesday, June 8th, 2011 at 7:40 pm and is filed under Chiapas, Human Rights, Human Rights Defenders, Indigenous people, Justice system, Land and Territory, Land rights. You can follow any responses to this entry through the RSS 2.0 feed. You can leave a response, or trackback from your own site.