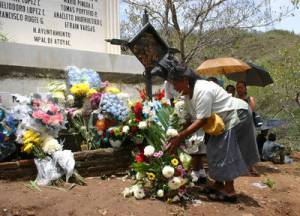 Place of the massacre @ La Jornada

On 28 June was commemorated the 16th anniversary of the massacre of 17 campesinos at Agua Blancas.  On that day in 1995, more than 60 campesino-members of the Campesino Organization of the Sierra del Sur (OCSS) who were traveling in two trucks on the highway were intercepted in Aguas Blancas by agents of the Judicial Police of the state of Guerrero.  They were forced to leave the trucks and lie down.  In this moment, police began to open fire, killing 17 persons and gravely injuring many others.  The OCSS campesinos were traveling to Atoyac de Álvarez to demand the presentation with life of their comrade Gilberto Romero Vázquez, who had been disappeared since 24 May 1995.

In observation of this massacre, militants from civil and campesino organizations engaged in simultaneous marches in Coyuca de Benítez and Acapulco, crying “Justice! That the intellectual authors be punished.”  Different social organizations also marched on the morning of 28 June from the community of Aguas Blancas, Coyuca de Benítez, Guerrero, to the zone of the tragedy.

“16 years later we know that ex-governor Rubén Figueroa Alcocer finds himself still here in Guerrero; he lives here and has not been bothered by the present government.  All governments that have had power since the massacre have failed to do justice,” said Benigno Guzmán Martínez, director of OCSS.

Representatives of social organizations that participated in the Aguas Blancas forum entitled “10 years of impunity” carried out in Coyuca de Benítez concluded that true justice has not been had, nor has the recommendations handed down by the Supreme Court of Justice in the Nation or those of the Inter-American Commission on Human Rights or the National Commission on Human Rights (CNDH) been observed in the least.

Ángel Aguirre, governor of Guerrero, has agreed to install a Truth Commission in the state regarding this case and others related to forced disappearances.  Regardless, the creation of this commission has aroused ire among the majority of social organizations and those of relatives of the disappeared in Guerrero due to their not having a legal basis to act juridically, given that what is needed is a prosecutorial office with legal capacity directed by civil society.

Guerrero: Briefs: Detention of FODEG member, Raúl Hernández received threats and announcement of the commeoration of the massacre at Aguas Blancas (30 June 2010)

Guerrero: 2nd anniversary of the imprisonment of Raúl Hernández (23 April 2010)

This entry was posted on Sunday, July 17th, 2011 at 10:43 am and is filed under Guerrero, Human Rights, Human Rights Defenders, Indigenous people, Justice system, Militarization, Paramilitary. You can follow any responses to this entry through the RSS 2.0 feed. You can leave a response, or trackback from your own site.