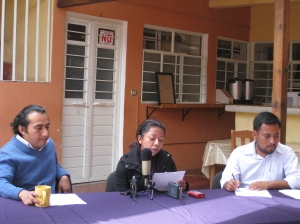 On 19 August, the Fray Bartolomé de Las Casas Center for Human Rights (CDHFBLC) denounced the torture, kidnapping, and violation of due process in the case of the brothers Andrés and Josué López Hernández, residents from the municipality of Pueblo Nuevo Solistahuacán, Chiapas, perpetrated by agents of the Special Police assigned to the Special Prosecutorial office against Organized Crime (FEDCO) from the State Attorney General’s Office of Chiapoas.

Fabiola Calvo Jiménez, wife of Andrés, reported in a press-conference the following about the January detention: “Upon seeing that they were beating them violently, we wanted to intervene so as to stop it, but we only succeeded in having them beat us as well, pushing us with the babies that we had with us, threatening us with their firearms, telling us they would kill us if we did not be quiet.  In those moments we thought they were kidnappers.  Immediately afterward they covered their faces and took them out of the house beating them.  They were directed to a white truck and taken away.”

She continued to tell what happened afteward to the detained:  “My husband and brother-in-law were tortured in a bar and were thrown onto the floor of the FECDO office, where they were blindfolded and bound.  In the bar they disrobed my husband Andrés and later beat him in the stomach.  Until now my husband complains of pain in his left ribs.”  “We are indigenous people who speak Tsotsil and we have come to know our rights; we know we have the right  to stay close to our place of origin to be judged and that the same law supports us with translators and lawyers familiar with our customs.”  Calvo Jiménez also mentioned the long distance that family-members must cross to visit the Huixtla jail, where they are being held.