Oaxaca: Two opponents of mining in San José del Progreso are fired on 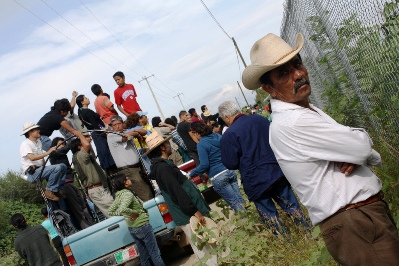 On 18 January, at least two residents of San José del Progreso, Ocotlán, who are opposed to the mining operation la Trinidad being carried out by the company Cuzcatlán (associated with the Canadian firm Silver Fortune) were injured by gunshots presumably fired by members of the municipality and police.  Bernardo Vásquez Sánchez, one of the injured, succumbed to his wounds the following day.  On the day of the incident, several residents had met in the center of the community to protest against the installation on their land of tubes that would allow for the exploitation of a deep well by the mining company.  Permission was granted by the municipal authorities without the previous informed consent of the populace.  Those opposed to the mining project also indicated the presence and participation of mayor Sánchez Muñoz in the acts, in addition to his brother (contractor for the construction job), and the alderman Gabriel Pérez Ruíz.

The Oaxacan Collective in Defense of Territory demanded that the government of Gabino Cué carry out an exhaustive investigation and punish those responsible for the opening of fire on the people.  Section 22 of the National Educational Workers Union (SNTE) also expressed its “total rejection of the use of public force and moreover the criminalization of social protest, given that it is well-known that apart from belonging to any organization, the injured on this occasion have undertaken a struggle in defense of their land and to protect the environment.”

Urgent action regarding the confrontation in San José del Progreso, to be signed and distributed among one’s contacts and networks.

Mexico: “Mined land, the defense of the rights of communities and of the environment” (14 December 2011)

Oaxaca: Coordination of United People of the Ocotlán Valley close entrance to silver mine in San José del Progreso (14 March 2011)