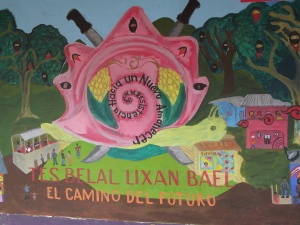 On 24 April, the Good-Government Council (JBG) The path to the future from the La Garrucha caracol denounced invasions and aggressions against the autonomous community of Nuevo Paraíso, where residents from Pojkol, Guadalupe Victoria, and the Las Conchitas ranch (from the Ocosingo and Chilón municipalities) have introduced themselves on several occasions in the recovered lands of said community between October 2011 and April 2012.  For this reason, the JBG indicates that “they are taking action with the government to legalize our recuperated lands.  They have invaded because they want to take them from us.”

They noted that “We call on the government to remove its people it is organizing in the places we have mentioned,” warning that “Death we do not want, but we say clearly to the bad governments that if they do not respect us we also will not respect them.  That is to say that if they want us to return to the way we were, well they will have it.  And enough of all this looting and their inanities.  If they cannot control their people, the governors, stop bothering us and stop robbing our Mexico.  Enough.”