Chiapas: Presentation of report on torture in Chiapas, “From Cruelty to Cynicism” 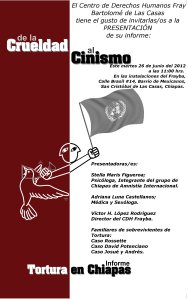 Cover of the report @ Cencos

In observation of the International Day in Support of Victims of Torture, on 26 June 2012 there was presented in a press-conference the report on torture in Chiapas entitled From Cruelty to Cynicism at the Fray Bartolomé de Las Casas Center for Human Rights, in San Cristóbal de Las Casas, Chiapas.

In this report Frayba notes that “in the period from January 2010 to December 2011, 47 persons survived tortured, of whom 8 were women and 38 males.  Of the same total, 8 were Tseltal persons, 7 Tsotsil, 1 Tojolobal, and 31 others defined themselves as mestizos.”  Similarly, the document finds that “a major part of the acts of torture registered during this period were produced in actions linked to the supposed procuration of justice, the implementation of some policy of public security within the context of the war declared on organized crime as advanced by President Felipe Calderón Hinojosa, as well as the actions implemented in the context of the program ‘Secure Cities’ promoted and implemented by the present state-government in Chiapas.”

The report argues that “different testimonies have revealed to us a reality that is different and even more serious: the existence of ‘security houses.’  These are spaces that put at risk the lives of ‘detained’ persons, making difficult their work of documentation and of adequately defending human rights.”  To conclude, the report’s authors note that “torture has come to be a form of social control, but regardless, and despite the fears founded in the repression exercised by the State’s armed forces, survivors of torture are increasingly conscious of the importance of denunciation toward the end of eradicating this crime against humanity.”

During the presentation of the report, participated relatives and survivors of torture who denounced the harassment and pain they suffered and continue to suffer.  Cases include that of Miguel Ángel Rosette García, who finds the Orantes family to be responsible for his arrest, or the cases of the brothers  Andrés and Josué López Hernández, from the Tsotsil community of Pueblo Nuevo Solistahucán, or the case of David Potenciano Torres, who was released in December 2011 for lack of evidence.

According to Cecilia Santiago Vera, a psychologist and contributor to the report who has studied the impacts of torture since 1995 and who applies the Istanbul Protocol to victims: “All the prisoners whom I have come to know have been tortured by some means of another, whether to implicate them in crimes or to punish them […].  We calculate that 80-90% of those who have been incarcerated have been beaten and tortured.”  As concluded Cecilia Santiago, a member of the Ik Collective, “no circumstance can justify acts of torture.”

The organization Christian Action for the Abolition of Torture (ACAT-France), together with the Fray Bartolomé de Las Casas Center for Human Rights, the Miguel Agustín Pro Juárez Center for Human Rights (Prodh Center), the Collective against Torture and Impunity (CCTI), and the Gobixha Committee for Comprehensive Defense of Human Rights (Código DH), edited another report that deals with the question of torture at the national level in Mexico.  The information they have released bases itself principally in a mission of investigation carried out from 2 to 18 July 2011, when ACAT-France held contact with different associations, interviewing victims and relatives of victims, in addition to seeking out information from elsewhere during the year 2011.  In this way, the new report “returns to address cases ‘from the past,’ thus showing how important it is to clarify the persistence of the situation of impunity,” as the press-release notes at the end of this report.

According to José Rosario Marroquín, director of the Prodh Center, “suspects who are supposedly responsible for these crimes are manufactured, so that the inefficiency of the investigations is hidden, and social pressure lessened.”

Chiapas: Justice is demanded in the case of the feminicide of the youth Itzel Yanet Méndez Pérez (16 May 2012)

Demand for end to feminicide in Oaxaca (8 September 2011)

Chiapas: Torture in the case of David Potenciano is denounced, as are acts of vigilance against relatives (21 December 2011)

This entry was posted on Monday, July 2nd, 2012 at 4:58 pm and is filed under Chiapas, Disappeared, Human Rights, Human Rights Defenders, Indigenous people, Justice system, Mexico, Militarization, Paramilitary, Political Prisoners/Prisoner of Conscience, torture. You can follow any responses to this entry through the RSS 2.0 feed. You can leave a response, or trackback from your own site.