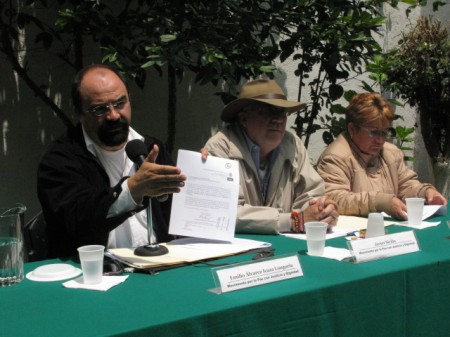 At the beginning of July, members of the Movement for Peace with Justice and Dignity (MPJD) and of various other Mexican human-rights organizations criticized the decision of the federal government not to approve the General Law on Victims (LGV), using the argument that the bill still has problems that would lead to a presidential veto.  The MPJD members indicated furthermore that the commentary was made too late, and that the president had only until 20 June to present his comments, though he in fact did so on 1 July.  In its press-release, the MPJD affirms that “the veto of the LGV is yet another reflection of the denial to recognize the national emergency lived in Mexico, given the dramatic human and social costs caused by this failed security strategy as imposed by the present administration.”

On 1 July, the Executive Branch made observations and returned the LGV to the Congress.  The president proposes to elevate the law to constitutional status so that no authority from the three governmental branches can evade responsibility.  Furthermore, Calderón would have it be the criminal who pays for the damages caused to victims, rather than the State.

Luis García López-Guerrero, the first general visitor of the National Commission on Human Rights (CNDH), commented in these terms that the president simply is exercising his constitutional rights, which are designed to make precise the details of this very important legal tool: “we do not believe that the law will be delayed for long, because the objections are minor and so will be resolved quickly.”

It should be remembered that the LGV was approved unanimously by the Chamber of Deputies on 30 April, with the support even of PAN legislators, and it obliges the State to render assistance and protection to victims by means of measures that include payment of up to 500 times the minimum monthly wage as compensation for damages incurred.

This entry was posted on Tuesday, July 10th, 2012 at 11:09 am and is filed under Human Rights, Human Rights Defenders, Justice system, Mexico. You can follow any responses to this entry through the RSS 2.0 feed. You can leave a response, or trackback from your own site.