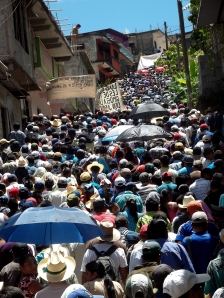 On 2 August, the Supreme Court for Justice in the Nation did not examine the case of the Tila ejido, a municipality in northern zone of Chiapas, even though it was planned for that session.  Many of the Ch’ol indigenous people who reside in this ejido travelled more than 1000 kilometers to be present at the decision of the Court regarding the illegal expropriation by the state government of 130 hectares of the Tila ejido, but their effort was in vain.  The campesinos from Chiapas indicated that they will continue with their mobilizations so that justice is done and their rights as indigenous people be respected.

In the words of a lawyer from the Agustín Pro Juárez Center for Human Rights, “We will have to wait until the Court takes on the affair and attend to te discussions that will follow.  Today only one case could be advanced; it is a very clear message from the justice administration that they do not have the sensibility to attend to the demands of the social groups they represent.  This case is a motion from a community that has for many generations struggled for the defense of land and territory.”

Chiapas: Ejidatarios from Tila announce schedule of march to the SCJN in Mexico City (31 July 2012)

Chiapas: Ejidatarios de Tila announce a caravan and march against the SCJN in defense of their land and territory (25 July 2012)

Chiapas: Tila ejidatarios reject compensation and request that the SCJN respects their right to territory (14 February 2011)

Chiapas: Authorities of the Tila ejido denounce negation of their right to land; their lives are threatened (9 September 2010)

Chiapas: ejidatarios march in Tila in defense of their lands (27 April 2010)

This entry was posted on Thursday, August 16th, 2012 at 8:31 am and is filed under Chiapas, Human Rights, Human Rights Defenders, Indigenous people, Justice system, Land and Territory, Land rights, Mexico. You can follow any responses to this entry through the RSS 2.0 feed. You can leave a response, or trackback from your own site.