Chiapas: Second Forum “For the Defense of Our Mother Earth and Land; Yes to Life, No to Mining Devastation”

Second Forum “For the Defense of Our Mother Earth and Land; Yes to Life, No to Mining Devastation” (@SIPAZ)

On 15 September, the Second Forum “For the Defense of Our Mother Earth and Land; Yes to Life, No to Mining Devastation” was held in the Santa María ejido, Chicomuselo municipality, located in the border region with Guatemala.  The objective of this forum was to “inform, share, and analyze the present situation that grips our country regarding mineral exploitation, as well as to come up with actions that seek to care for and defend our Mother Earth and land.”  The forum was part of the activities of the national and international day organized by the Chiapas Platform of the Movement for Peace with Justice and Dignity.

In the final declaration, the participants at the Second Forum made a call to the ejidatarios and persons who have agrarian rights not to cede their territory for open-pit mining purposes.  They affirmed that “We are angered that in light of the poverty and lack of information our communities suffer, they must accept these projects that imperiled their own lives, as has happened in the Grecia and Nueva Morealia ejidos (located in Chicomuselo), where the scarcity of water in the spring is obvious, and the irreparable damage to the environment that occurs with the destruction of trees.” 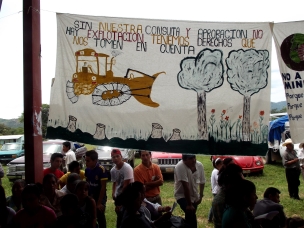 They expressed that “we are worried that newly the rights of the people be violated by means of the most devastating actions taken against our mother earth, like open-pit mining, which affects our communities in different ways–in terms of health, the environment, and the degradation of the social fabric.”  This is the reason they have asked different levels of the government “to respect the human rights recognized in national and international instruments like the Federal Law for Ecological Equilibrium and Protection of the Environment.”

Mexico: “Mined land, the defense of the rights of communities and of the environment” (14 December 2011)

This entry was posted on Friday, September 21st, 2012 at 12:10 pm and is filed under Chiapas, Human Rights, Human Rights Defenders, Indigenous people, Land and Territory, Land rights, Mexico, Mining. You can follow any responses to this entry through the RSS 2.0 feed. You can leave a response, or trackback from your own site.