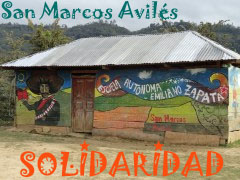 On 23 February, the Fray Bartolomé de Las Casas Center for Human Rights (CDHFBC) launched an urgent action in light of the “immediate risk” that “for the second time there be realized a forced displacement of support-bases of the Zapatista Army of National Liberation (EZLN) as committed by residents of the same ejido [of San Marcos Avilés, Chilón municipality], affiliates of the Institutional Revolutionary Party (PRI), the Party of the Democratic Revolution (PRD), and the Green Ecologist Party of Mexico (PVEM).”

The new threats came to a head when ejidal authorities demanded that the Zapatista support-bases pay a land tax, which they refused to do: “We have suffered a great deal due to all the aggressions committed by these party-members, and the government has done nothing.  Now is not the time to pay, as we are in resistance, and we demand respect for our rights to our lands.  If we do not receive anything from the government, we will not pay taxes.”  In light of this, ejidal authorities replied that, if they would not do so, they would be displaced.  They then began to organize themselves and to contact other municipal and state authorities to help carry out said displacement.

The CDHFBC stressed in its document “the responsibility of the Chiapas state-government, which due to deliberate omission has not acted to guarantee the personal integrity and security of the Zapatista support-bases and their access to land, despite the numerous interventions sent by this very organization demanding that the Mexican government provide the necessary measures for the personal security and integrity of the threatened indigenous people, as well as their right to fundamental rights of free expression and thought, in addition to their right to land and the autonomous processes that they are developing, in observance of the right to the free self-determination of peoples.”

Chiapas: Communiqué from the Oventic JBG regarding the aggressions and death-threats on the aprt of persons affiliated with political parties against Zapatistas in San Marcos Avilés(5 July 2011)

This entry was posted on Tuesday, February 26th, 2013 at 2:41 pm and is filed under Chiapas, EZLN, Human Rights, Human Rights Defenders, Indigenous people, Justice system, Land and Territory, Land rights, Paramilitary, Women, Youth. You can follow any responses to this entry through the RSS 2.0 feed. You can leave a response, or trackback from your own site.