Oaxaca: Events and marches in observance of International Women’s Day 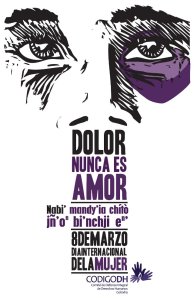 On 8 March in Oaxaca state, there were had several marches and events to observe International Women’s Day.  The state of Oaxaca is one of the states with the highest increase in number of feminicides.  During the course of the year 2013, the Institute of Oaxacan Women has reported 11 homicides against women.

The march that occurred in Oaxaca de Juárez was carried out by more than 1500 persons, including teachers from Section 22 of the National Educational Workers’ Union (SNTE) and members of social organizations.

In San Pedro Amuzgos, more than 200 women organized to march through the principal streets of the community, demanding respect for their rights and a halt to violence against women.  For its part, the Committee of Comprehensive Defense of Human Rights Gobixha (Código DH) presented the campaign “Pain is never love” as part of its activities to prevent violence against women in the region, given that it maintains an office in San Pedro Amuzgos.

It should be mentioned that in 2012 the Oaxacan state Congress approved the reforms to the Penal Code which classify the crime of feminicide, sanctioning it with 40 to 60 years imprisonment.  However, this law has not been sufficient to halt violence against women, given that every 4 days there is registered a feminicide in Oaxaca.  Over the course of the administration of Gabino Cué Monteagudo so far, there have been observed 176 feminicides, as denounced by the Union of Indigenous Communities of the Northern Zone of the Isthmus (UCIZONI).

This entry was posted on Wednesday, March 20th, 2013 at 11:28 am and is filed under Human Rights, Human Rights Defenders, Indigenous people, Justice system, Mexico, Oaxaca, Women, Youth. You can follow any responses to this entry through the RSS 2.0 feed. You can leave a response, or trackback from your own site.