Chiapas: Denunciation of death-threats and fabrication of evidence on part of PGJE made by those displaced from the Busiljá and Cintalapa ejidos 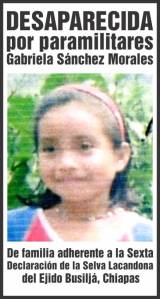 On 23 April, families who have been displaced from the Busiljá and Cintalapa ejidos (Ocosingo municipality), publicly denounced that agents of the Public Ministry (which belongs to the State Attorney General’s Office of Chiapas, PGJE) in Ocosingo had pressured and threatened Mrs. Elena Morales Gutiérrez to sign a document affirming knowledge of the whereabouts of her daughter Gabriela Sánchez Morales, who was kidnapped in 2011. Regardless, in a denunciation the families claim now that the girl still has not been located.  It should be noted that the Inter-American Commission on Human Rights (IACHR) has awarded the precautionary measures requested by the family of the minor.  Furthermore, those displaced expressed their disappointment with the lack of execution of penal action against the presumed kidnappers.  In this sense, they indicate that “the PGJE seeks to trick the Inter-American Commission on Human Rights,” given that the PGJE must inform the IACHR on progress in the investigations.

Chiapas: Civil society expresses its concern for the situation of those displaced from Busiljá (26 February 2013)

This entry was posted on Monday, April 29th, 2013 at 1:24 pm and is filed under Chiapas, Disappeared, Human Rights, Human Rights Defenders, Justice system, Land and Territory, Land rights, Mexico, Paramilitary. You can follow any responses to this entry through the RSS 2.0 feed. You can leave a response, or trackback from your own site.