National: Collaborators of the “72” migrant home abandon work due to threats 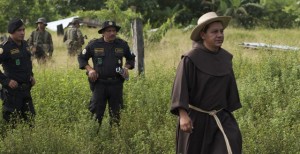 Despite the fact that on 19 April the Inter-American Commission on Human Rights (IACHR) awarded precautionary measures to Fray Tomás González, Rubén Figueroa, and the personnel and migrants housed in the Migrant Rest Home “la 72” in Tenosique, Tabasco, these measures (according to recent denunciations) have not been efficient toward the end of guaranteeing the security of the rest home, leading part of the work-team indefinitely to decide to abandon its work there, out of fear for their lives and physical integrity, following recent death-threats.  On 8 June personnel from the migrant-home received a new death-threat from a person who approached the home, warning Rubén Figueroa to stop erecting obstacles in the path of organized crime.  If he did not, the threat continued, he would be “embalmed,” as human-rights groups have claimed.  This person was arrested for the death-threat, together with three others implicated in the kidnapping of migrants, but these three were released on 10 June, just as the State Attorney General’s Office began to procure evidence tying them to crimes committed against migrants.

In a meeting carried out between authorities and members of the rest-home on 17 May, there was agreed that the Tabasco state government would commit itself to implementing different protection mechanisms, including “accompaniments of Fray Tomás González Castillo to guarantee his integrity, both in the home as in his movements,” by the federal police.  However, the federal police suspended its patrols this past week without explanation.  Following a letter campaign and pressure in the media, the patrols returned on 11 June.  “This situation leaves migrants even more vulnerable, given that they are the object of brutal acts of violence that go unpunished,” they noted.

Mexico: Caravan for Peace concludes after journeying to Tabasco, Veracruz, and Puebla (28 September 2011)

This entry was posted on Monday, June 24th, 2013 at 7:18 pm and is filed under Disappeared, Human Rights, Human Rights Defenders, Indigenous people, Justice system, Mexico. You can follow any responses to this entry through the RSS 2.0 feed. You can leave a response, or trackback from your own site.