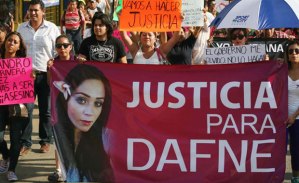 On 8 June, members of different non-governmental organizations (NGOs) carried out the “Caravan against Feminicide,” which departed from the Fountain of the Five Regions toward the Santa María Ixcotel jail in Oaxaca.  The aim of the march was to demand justice amidst the more than 204 women who have been killed in the state over the past 3 years.  According to Ana María Hernández Cárdenas,  coordinator of the organization Consortium for Parliamentary Dialogue and Equity, the caravan sought to raise awareness in Oaxacan society of the increasing wave of violence targeting women, which in its most current phase has left 58 women and girls disappeared.  In this way, she indicated the various irregularities on the part of the appropriate authorities in different legal matters.  “It is lamentable, the degree of impunity in cases of murders, such as with the youth Elizabeth Martínez y Dafne Carreño,” she noted.

Oaxaca: March of releatives of victims of feminicide and members of human rights organizations for women (22 April 2013)

Oaxaca: More feminicides under Gabino Cué than in the final years of Ulises Ruiz (24 January 2013)

This entry was posted on Monday, June 24th, 2013 at 4:40 pm and is filed under Disappeared, Human Rights, Human Rights Defenders, Indigenous people, Justice system, Mexico, Oaxaca, Women, Youth. You can follow any responses to this entry through the RSS 2.0 feed. You can leave a response, or trackback from your own site.