Chiapas/National: CNI and EZLN express solidarity with Yaquis of Sonora against the looting of water 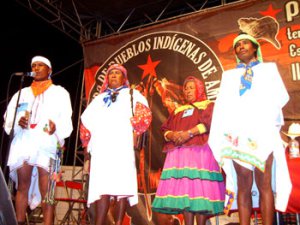 In a communique released on 7 July, the Clandestine Indigenous Revolutionary Committee-General Command of the EZLN (CCRI-CG) and the National Indigenous Congress (CNI) saluted the “historical mobilization” of the Yaqui people in Sonora “to defend their existence and territory.”  More concretely, the organizations pronounced themselves against the “robbery of water that the bad government seeks to advance through the Independence Aqueduct.”The two demanded “the immediate cancellation of arrest-orders and the fabrication of crimes against members of the Yaqui tribe,” condemning “the criminalization of their struggle” when “the Yaqui river has historically been the transporter of the ancestral continuity of the culture and territory of the Yaqui people.”They warned finally that “those who comprise the CNI reiterate that if they touch one of us, they touch all of us, and for this reason we will respond to any attempt to repress this dignified struggle, or any other.”

This entry was posted on Sunday, July 21st, 2013 at 12:35 pm and is filed under Chiapas, EZLN, Human Rights, Human Rights Defenders, Indigenous people, Land and Territory, Land rights, Mexico, Mining, Women, Youth. You can follow any responses to this entry through the RSS 2.0 feed. You can leave a response, or trackback from your own site.