Guerrero: murder of a social activist from the Campesino Organization of the Southern Sierra 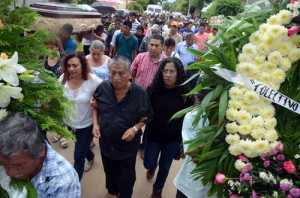 On 19 October, Rocío Mesino Mesino was murdered in the Mexcaltepec community, which pertains to the Atoyac de Álvarez municipality.  According to the story told by her relatives, the rights-defender found herself supervising the construction of a provisional bridge in this community, when a man arrived who shot her several times and then rode away on a motorcycle which had been awaiting him.

Iñaki Blanco Cabrera, State Attorney General, has said that different lines are being pursued for investigating this murder of the leader of the Campesino Organization of the Southern Sierra (OCSS), including the participation of organized crime syndicates which operate in the region of the Grand Coast of the state.  In a press-conference, the Guerrero state official said that the campesino leader had been shot six times by pistol.  Blanco Cabrera noted that her killers have not yet been identified, despite the fact that the crime took place in the middle of the day and in the presence of several witnesses.  It is understood that many are afraid of reprisals if they were to provide testimony.

The Guerrero Network for Human Rights (Redgro), the Collective against Torture and Impunity (CCTI), the Front of Democratic Organizations of the State of Guerrero (Fodeg), the Regional Center in Defense of Human Rights José María Morelos and Pavón, and the Society of Students from the Rural Normal School of Ayotzinapa, among others, demand an investigation into the crime.  Furthermore, they denounced that 10 homicides have been committed against social activists in the state of the PRD governor Ángel Aguirre, and that not one has yet been resolved.

Guerrero: Murder of leader of the Organization of Ecologist Campesinos of the Sierra de Petatlán and Coyuca de Catalán (7 December 2012)

This entry was posted on Tuesday, November 12th, 2013 at 4:49 pm and is filed under Uncategorized. You can follow any responses to this entry through the RSS 2.0 feed. You can leave a response, or trackback from your own site.