National: Patishtán requests that Peña Nieto release all prisoners who are unjustly imprisoned 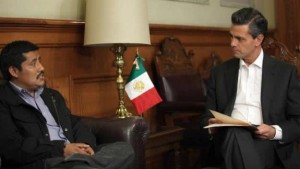 A month after having received a presidential pardon which put an end to the thirteen years he spent imprisoned, Tsotsil Professor Alberto Patishtán Gómez met with President Enrique Peña Nieto in the National Palace.

At the meeting, which also included Secretary of Governance Miguel Ángel Osorio Chong, Subscretary Luis Enrique Miranda Nava, relatives of Patishtán, and representatives from civil organizations, Patishtán requested the review of cases of other indigenous and non-indigenous prisoners who have been unjustly incarcerated.  “You should consider that there are many indigenous and non-indigenous prisoners and pay attention to their rights; as in my case, they were violations of human rights.  I wish that the cases of other comrades be analyzed,” said the Tsotsil professor.

Among others, Patishtán stressed the cases of the Tsotsil indigenous person Alejandro Díaz Santís, who has been imprisoned for 15 years in San Cristóbal de las Casas with a sentence of 30 years, in addition to the cases of Antonio Estrada and Miguel Demeza, from Bachajón, Chiapas, who adhere to the Sixth Declaration of the Lacandona Jungle.

Following the meeting, the president’s office released a communique expressing that Peña Nieto would commit himself to remaining vigilant with regard to the cases mentioned by Patishtán and consider awarding other pardons.

Chiapas: Denunciation of death threats in Prison No. 5  of San Cristóbal (8 December 2013)

Chiapas: After 13 years of unjust incarceration, freedom for Patishtán (13 November 2013)

Chiapas: Rejection of recognition of Patishtán’s innocence. “There is a look of denigration toward the indigenous sector,” says lawyer (4 October 2013)

This entry was posted on Monday, December 9th, 2013 at 6:06 pm and is filed under Chiapas, EZLN, Human Rights, Human Rights Defenders, Indigenous people, Justice system, Mexico, Political Prisoners/Prisoner of Conscience, torture, Women, Youth. You can follow any responses to this entry through the RSS 2.0 feed. You can leave a response, or trackback from your own site.