Chiapas: Los Llanos and San José El Porvenir reject passage of highway from San Cristóbal to Palenque through their communities 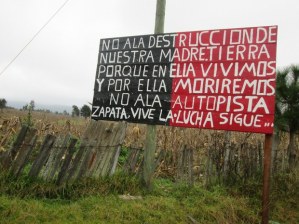 On 7 February, representatives from the Los Llanos ejido, San Cristóbal de Las Casas municipality, and the San José El Porvenir community, Huixtán municipality, reported their opposition to the passage of the planned highway between San Cristóbal and Palenque through their communities.  They indicated having knowledge “that they desire to pass the highway from San Cristóbal to Palenque through our community and so expropriate from us land that is most productive and gives us all to eat.”  They stressed that two roads had already been built on their lands, “and now they want to build a highway.  This is not fair for us, because it puts at risk many of our children and elders who walk through the communities, as well as our animals.  From those lands we feed ourselves; we survive from them, because we have no salaries or wages; we earn our bread day by day by working our mother earth.  We are not opposed to the highway, but we are opposed to the idea that they will take away our lands, which are of fundamental value for the life of our community.”  Similarly, they denounced that the government “has not come to ask us for our permission or not; they simply are saying that the highway will pass through [here], but we are concerned precisely because this land is what gives us to eat; with what will we eat if they take it from us?”

In the case of the Los Llanos ejido, they explained that the construction would imply the displacement of more than 860 persons in that community.  “They have offered us other lands in Rancho Nuevo, supposedly so as to resettle us, but regardless these lands are under litigation because they pertain to Mitzitón.  We do not accept this because it would imply being in conflict with our indigenous brothers who own these lands,” explained the ejidatarios of Los Llanos.  “They have told us that the highway will pass by force, whether we like it or not.  They are seeking to buy off communal leaders by threatening to refuse them infrastructure projects, such as asphalt projects,” they explained in a public denunciation.

The bishop of the San Cristóbal diocese, Felipe Arizmendi, said that “many campesino and indigenous peoples are not seeing this as a benefit for them, but rather as irreversible damage to their lands, which is like a mother that gives them life.  They say that, although they be paid well for their lands, they will lose them forever and they would have no where to sow maize, beans, and coffee–their source of life.  For this reason, many are expressing total opposition to this proposed project.”  Arizmendi explained that a highway is welcomed when it brings benefits to all, not only for touristic agencies and the rich.

For his part, Eduardo Ramírez Aguilar, secretary of governance of Chiapas, noted that there will be “no retreat” for the project of constructing the highway between San Cristóbal and Palenque.  At a press conference he said that “all the rights of free transit” have been established in the Palenque municipality, this following dialogues taken with residents of all the localities through which the highway would pass.  He added that in Ocosingo there also “have been negotiations and only in two communities is there resistance, but we have now progressed through more than 60 percent of the pathway.”  He observed that in Tenejapa, through where a large part of the highway would pass, “we are building consensus so that people authorize the permits through dialogue.”  With regard to the case of San Cristóbal, he mentioned that “we have a problem with a kilometer in Los Llanos and 14 in Huixtán; that is where we see the most resistance.”