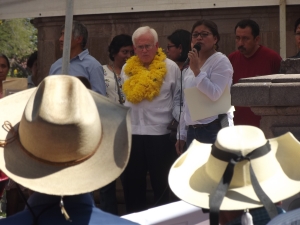 On 11 February, the caravan “A light against impunity” led by the bishop of Saltillo, Raúl López Vera, visited the municipalities of Ayutla de los Libres and Acapulco.

In Ayutla de los Libres, there was held a march comprised of indigenous persons, members of social organizations such as the Organization of the Me’phaa Indigenous People (OPIM), and communal police from the Regional Coordination of Communal Authorities (CRAC).  Upon the arrival of the march to the principal plaza, a rally was held.  Survivors of the El Charco massacre demanded from bishop Raúl Vera López the demilitarization of the region and compensation for the deaths of the 11 campesinos killed by the Mexican Army nearly 16 years ago.  Families of the Communal Police from the El Paraíso House for Justice demanded the release of nine detained persons being held in Acapulco.

Raúl Vera López called on the state government to invest in the communal system of the CRAC, which he finds to be “exemplary” as an alternative to harassment and incarceration.  He called on members of the CRAC to protect the authenticity of their organizational process and not to allow themselves to be corrupted.  He also pronounced himself in favor of the clarification of the El Charco massacre and a cessation of the militarization of the area.

The caravan ended this same day in Acapulco, where it also held a rally in the zócalo.

For more information (in English):

This entry was posted on Friday, February 14th, 2014 at 10:09 am and is filed under Disappeared, Guerrero, Human Rights, Human Rights Defenders, Indigenous people, Justice system, Land and Territory, Land rights, Mexico, Militarization, Mining, Paramilitary, Political Prisoners/Prisoner of Conscience, religion, torture, Women, Youth. You can follow any responses to this entry through the RSS 2.0 feed. You can leave a response, or trackback from your own site.