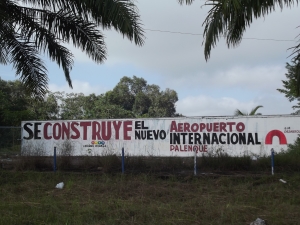 On 12 February, President Enrique Peña Nieto (EPN) inaugurated jointly with Governor Manuel Velasco Coello the international airport in Palenque, which according to the national leader “will create interregional communication in a positive way for society as well as for the economy, facilitating touristic flows.”  “Better airports, better roads, better iron pathways will make possible progress and development to arrive by means of connections,” declared EPN.

The new installations comprise 249 hectares located on the outskirts of Palenque, and the conditions of the soil and landing strip will allow for international flights.  At present, the zone receives 600,000 tourists annually, providing 1.4 billion pesos in income, an amount which is thought will increase with the new airport.

Hundreds of campesinos, men and women, attempted to approach the president to submit personal petitions, but all of these were collected by a member of the Presidential Mayor State who said he would hand them over to the president.  At the end of the event the campesinos found their documents strewn about the asphalt.