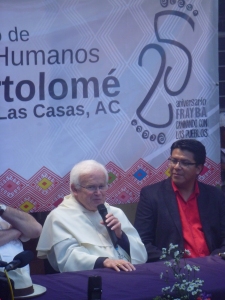 On 19 March, the Fray Bartolomé de las Casas Center for Human Rights (CDHFBC, better known as Frayba) celebrated 25 years since its founding.  Created in 1989 through the invitation of the then bishop of the the San Cristóbal de San Cristóbal diocese, Samuel Ruíz García, it in time passed into becoming a key reference for the defense of human rights, particularly of indigenous peoples, at the local, national, and international levels.

Part of the celebrations included the organization of an “International forum on human rights: from memory to hope,” which was attended by more than 350 persons, nationals and internationals.  On 18 March, the book The Social Evangelism of Bishop Raúl Vera was presented by the very bishop himself, who previously had worked with Samuel Ruiz in Chiapas and who now holds the presidency of the CDHFBC.

At the press-conference and ceremony which closed the events, the members of the CDHFBC recognized the difficulties and challenges implied for example by the advance of extractive industry and touristic projects in Chiapas, ina ddition to the attempts to loot territory, but they stressed that “it is the people who guide our path, in a positive feedback loop.”

This entry was posted on Sunday, March 30th, 2014 at 8:26 am and is filed under Chiapas, Disappeared, EZLN, Human Rights, Human Rights Defenders, Indigenous people, Justice system, Land and Territory, Land rights, Mexico, Militarization, Paramilitary, Political Prisoners/Prisoner of Conscience, religion, torture, Women, Youth. You can follow any responses to this entry through the RSS 2.0 feed. You can leave a response, or trackback from your own site.