Chiapas: OCEZ-RC suspends sit-in it had installed in San Cristóbal 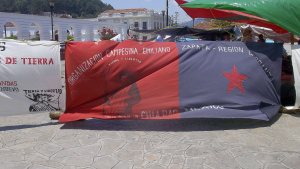 On 8 April, the Emiliano Zapata Campesino Organization-Carranza Region (OCEZ-RC) suspended the sit-in it had installed in San Cristóbal de Las Casas beginning on 31 March.  In a press-conference, members of OCEZ-RC recalled that they had sought to demand a response to their agrarian, justice, and transport demands, among others.  The decision to suspend the sit-in coincided with an agreement made with the authorities to begin negotiations on 22 April.  In a press-release members noted that “we hope that at the 22 April table we will be attended to by functionaries of the government with the capacity to resolve, as led by Secretary General of Governance Eduardo Ramírez Aguilar; we also hope that there will be a serious proposal to resolve all our demands.”  They added that “we have been patient in the search for a solution to our demands, but now we cannot wait any longer, and for this reason we publicly warn Governor Manuel Velasco Coello that, if there is no serious response to our demands, including resolution, we have decided to take other actions.”

This entry was posted on Wednesday, April 23rd, 2014 at 12:58 pm and is filed under Chiapas, Human Rights, Human Rights Defenders, Indigenous people, Justice system, Land and Territory, Land rights, Women, Youth. You can follow any responses to this entry through the RSS 2.0 feed. You can leave a response, or trackback from your own site.