Chiapas: Attacks on EZLN support bases leave one dead and 15 injured among Zapatistas 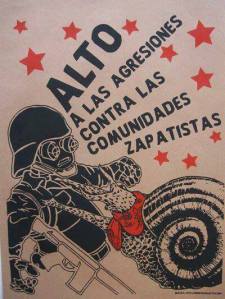 According to information from the Fray Bartolomé de las Casas Center or Human Rights (Frayba), on 2 May, members of the Green Ecologist Party of Mexico (PVEM), the National Action Party (PAN), and the Historical Independent Center of Agricultural Workers and Campesinos (CIOAC-H) attacked support bases of the Zapatista Army of National Liberation (BAEZLN) in the La Realidad ejido, Las Margaritas municipality, Chiapas.  As a result of the attack, one Zapatista support-base died: José Luis Solís López was shot three times and was beaten several times, in addition to being cut with a machete.

The events took place when a CIOAC-H commission arrived at the “Towards Hope” Good-Government Council (JBG) in the Zapatista Caracol I, based in La Realidad, to request the release of the representative of the organization, Roberto Alfaro Velasco, who had supposedly been held by the Junta since the previous day, 1 May.  However, Roberto Alfaro clarified that he had not been arrested by the Zapatistas but rather had decided freely to stay in the Junta to attempt to resolve the open conflict rooted in the appropriation by the CIOAC-H of a truck pertaining to the JBG last 16 March.  Upon hearing this clarification, the commission for “liberation” decided to join the meeting to attempt to resolve the problem of the truck.  Two Frayba members also participated at the meeting in the capacity of observers.

In the afternoon, members of the CIOAC-H, PVEM, and PAN who were staying outside the JBG headquarters began to destroy the Zapatista autonomous school and clinic.  When this happened, says Frayba, the BAEZLN decided to stay within the JBG to avoid a confrontation, as did the negotiation team of the CIOAC-H, for reasons of security.

Minutes later, a group of BAEZLN en route to the JBG center were attacked with firearms, stones, and machetes on the part of the attacking group of CIOAC-H, PVEM, and PAN members, leading the BAEZLN who had decided to stay inside the JBG to exit to assist their comrades under attack.  This second group was also ambushed and attacked, resulting in the death of José Luis Solís and the injury of 15 other Zapatistas, according to the JBG’s communique.

In light of this situation, Frayba condemned the attack on the autonomous project of the EZLN and the escalation of violence which puts at risk the physical integrity of BAEZLN in La Realidad.  Similarly, it called on the Chiapas state government promptly to initiate an impartial investigation to clarify the events and to punish the material and intellectual authors of the murder and assaults which took place.

For its part, the “Towards Hope” JBG has debunked the information which has appeared in mass media that refers to a confrontation between groups, when what really took place was an attack against BAEZLN.  It also has announced that the case will be referred to the General Command of the EZLN for investigation and justice.

Lastly, on 4 May, agents of the Special Police and the State Preventive Police (PEP) arrested five members of the CIOAC-H on the charge of having participated in the aforementioned events.

National/International: End of solidarity week “If the Zapatistas are harmed, all are harmed” (3 March 2014)

Chiapas: Denunciations of attacks on BAEZLN from the Morelia JBG and on hospital personnel from San Carlos de Altamirano (7 February 2014)

Chiapas: Denunciation of harassment and attacks from the Whirlwind of Our Words Caracol (7 December 2013)