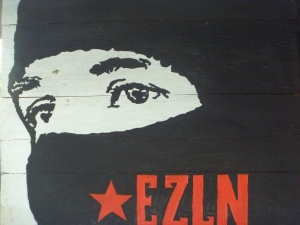 On 8 May, the Zapatista Army of National Liberation (EZLN) published a communiqué written by Subcomandante Marcos regarding the violent events which took place on 2 May in La Realidad, leaving one Zapatista dead and 15 others injured.  Marcos announced that the activities planned for the end of May will be canceled, including an event in homage to Don Luis Villoro Toranzo and the “Ethics amidst looting” seminar.

Marcos explains the reasons for which “the primary results of the investigation, in addition to the information is reaching us, leaves no room for doubt: […] this was not a problem of communities, in which groups confronted each other in the heat of the moment.  It was a planned attack: first the provocation with the destruction of the school and the clinic, knowing that our comrades had no firearms and that they would go to defend what they had humbly raised with their efforts; afterward, the positions taken by the aggressors, foreshadowing the path they would continue to take from the caracol to the school; and then finally, the crossfire against our comrades.

[…] Now those from above speak of the ‘Acteal model’: ‘it was an inter-communal conflict over a gravel bank.’  Mmh…  Thus militarization follows, as do the hysterical voices of the domesticated media, the lies, the posturing, and then persecution.”

Chiapas: Attacks on EZLN support bases leave one dead and 15 injured among Zapatistas (16 May 2014)

National/International: End of solidarity week “If the Zapatistas are harmed, all are harmed” (3 March 2014)

Chiapas: Denunciations of attacks on BAEZLN from the Morelia JBG and on hospital personnel from San Carlos de Altamirano (7 February 2014)

Chiapas: Denunciation of harassment and attacks from the Whirlwind of Our Words Caracol (7 December 2013)