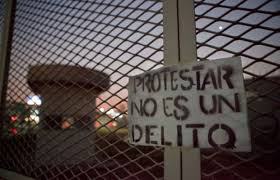 “Protesting is a right” (@revoluciontrespuntocero)

On May 19, the Network All Rights for All (Red TDT), which consists of 74 civil society organizations from 20 states of Mexico, condemned the adoption of laws that criminalize the right to protest in Chiapas and Puebla. This statement was published after the adoption of the “Code of legitimate use of public force” in Chiapas on May 15 and that of a similar law in Puebla the following week. The Network recalled that social protest is a legitimate mechanism for enforcing rights, so that the state has an obligation to protect, respect, and guarantee its exercise. It stressed “the ambiguity in the use of concepts such as public peace, public order, rational use of force, and violent demonstrations, among others, since it gives way to discretionary interpretations from the authorities.“

On May 21, national and international civil organizations and alternative media issued a statement in which they referred to the code that was approved in Chiapas indicating “that social protest arises when impunity prevails, or when no channels to resolve disagreements exist, or when these channels have been exhausted, are inoperative or are ignored by federal, state or municipal institutions, or when the violation of human rights is of great magnitude affecting a large number of the population, such as with the so called structural reforms. With the Code that was approved, the government of Chiapas seems to consider the protests already to have been completed crime or in course; the demonstrators are considered as criminal suspects and their organization as an enemy which aims at destabilizing social peace. The approved Code doesn’t take into account the context of social and political conflicts; instead, it brings the protests to the judicial field. Social unrest is read from the perspective of the criminal code, and it is dealt with it as if it were a criminal behavior.”

The bulletin concludes reaffirming that “Protesting is also an instrument against impunity and oblivion; it strengthens the collective memory of the people and represents a political counterweight to the exercise of unbridled State power. Protesting is a right;to suppress it is a crime.”

For more information of SIPAZ (in English):

Chiapas: State congress approves initiative on “legitimate use of force” (May 18, 2014)

This entry was posted on Monday, June 9th, 2014 at 4:55 pm and is filed under Chiapas, Human Rights. You can follow any responses to this entry through the RSS 2.0 feed. You can leave a response, or trackback from your own site.