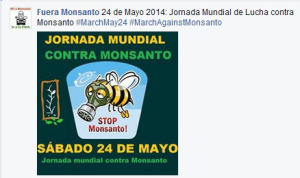 On May 24, a second Global Day of action against Monsanto–a multinational company that provides chemicals for agriculture, most of them herbicides, pesticides and GMOs–was organized. Of the 351 marches that took place in the world, 13 of them were in Mexico.

In Mexico City, hundreds of activists held a “Corn Carnival,” under the motto “we want beans, we want corn, we want Monsanto out of the country”. In addition to a march-carnival, workshops, exchange of seeds, urban gardens and mini-milpas were organized. The protesters expressed their opposition to the trade, experimental plantings, and pilot projects of transgenic corn in Mexico. On the other hand, they denounced the agrarian reform currently promoted by the federal government, considering that it aims at privatizing lands.

In both Oaxaca and Chiapas, actions were also performed to collect one million signatures and to send them to President Enrique Peña Nieto so as to get information and respect for the decision to reject GMOs.

For more information (In Spanish):

Mexico/Chiapas: International Day of Action against Monsanto and transgenics (June 7, 2013)

This entry was posted on Monday, June 9th, 2014 at 9:10 am and is filed under Chiapas, Land and Territory, Land rights, Mexico, Oaxaca. You can follow any responses to this entry through the RSS 2.0 feed. You can leave a response, or trackback from your own site.