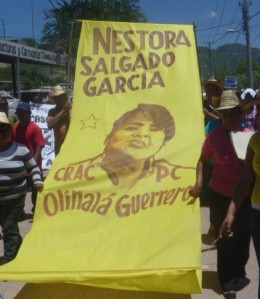 A year ago, on 21 August 2013, Nestora Salgado García, member of the Regional Coordination of Communal Authorities (CRAC-PC) in Olinalá, Guerrero, was arrested and accused of aggravated kidnapping and organized crime. She was then transferred to the maximum-security prison in Tepic, Nayarit, where she has been held to this day. From prison, she has written, “Remember, my beautiful people, that I am imprisoned.” The last time that her daughter Saira Rodríguez Salgado visited her was on 2 August, when she reported that she found her mother desperate due to the inhumane treatments she received. Saira Rodríguez reported that “this is a punishment against my mother for fighting for her people.”

On the occasion of the first anniversary of her arrest, the National Network of Defenders of Human Rights in Mexico (RNDDHM) published a communique to demand her transfer to a jail in Mexico City as well as adequate attention to her health, in addition to demanding the “immediate and unconditional release of the human-rights defender.” The RNDDHM declared that “we call on the authorities of the federal government and the Guerrero state government to provide security guarantees for human-rights defenders, and we demand the cessation of the impunity of murders and forced disappearances of rights-defenders. We have had quite enough of the criminalization of human-rights defenders and of the social movement in Guerrero.”

The Committee of Women #NestoraLibre initiated the campaign “We are all Nestora,” toward the end of expressing solidarity toward her. In this way, both organizations demanded the release of other political prisoners: 9 members of the CRAC-PC and Marco Antonio Suástegui, spokesperson for the Council of Ejidos and Communities Opposed to the La Parota Dam (CECOP). These arrests, according to the RNDDHM, “evince the political character of penal persecution and the illegal use of federal prisons, using the complicity of the federal government, from which no human-rights defender in Guerrero is exempt.”

Guerrero/National: Emergence of Committee of Women for the Liberty of Nestora Salgado (2 September 2014)

Guerrero: soldiers and policemen burst into the La Concepción Commmunity after a Cecop assembly in which the case of Marco Antonio Muñoz Suástegui was reported on (29 August 2014)

This entry was posted on Tuesday, September 2nd, 2014 at 4:00 pm and is filed under Guerrero, Human Rights, Human Rights Defenders, Indigenous people, Justice system, Land and Territory, Land rights, Mexico, Militarization, Paramilitary, Political Prisoners/Prisoner of Conscience, torture, Women, Youth. You can follow any responses to this entry through the RSS 2.0 feed. You can leave a response, or trackback from your own site.