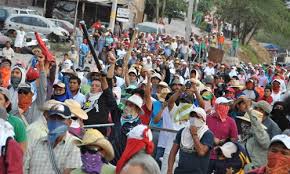 On 11 November, Guerrero state police beat the journalist Carlos Navarrete Rubio from the Diario El Sur, beyond physically and verbally attacking at least 10 journalists who were documenting the violent displacement of at least 500 teachers from the State Coordination of Educational Workers in Guerrero (CETEG) at the state offices of the Institutional Revolutionary Party (PRI) in Chilpancingo.  These teachers were protesting the disappearance of the 43 normalist students from Ayotzinapa.

The next day, media workers protested at the Guerrero Palace of Governance and at the CETEG sit-in to demand guarantees for their journalistic work.  The reporter from El Sur who had been attacked publicly read aloud a letter in which he affirms that “the lack of protocols to dissuade social protests and the lack of training in terms of human rights on the part of state police is now evident, as has been reflected during protests that have taken place in recent days in Acapulco and Chilpancingo (…).  We are clear that we will not allow any other attacks against our media representatives.  Indeed, if this is repeated, we will react using all means we have at our disposal.”

Article 19, an organization that protects the right to freedom of expression, noted that the Guerrero state police must adopt the necessary measures to guarantee effective protection of this right “within contexts of manifestations or public protests, as in the adoption of protocols that are to guide security forces and other authorities in such contexts, toward the end of having them observe their tasks of preventing and protecting against any attacks directed at journalists and those who assist with the realization of coverage of protests, including the mobilization of emergency medical aid in safe conditions rather than criminalization.”

Guerrero: municipal police of Iguala fire on students of the Rural Normal School of Ayotzinapa. Six have died (11 October 2014)

This entry was posted on Saturday, December 6th, 2014 at 1:04 pm and is filed under Disappeared, Guerrero, Human Rights, Human Rights Defenders, Indigenous people, Justice system, Mexico, Paramilitary, Political Prisoners/Prisoner of Conscience, Press, torture, Women, Youth. You can follow any responses to this entry through the RSS 2.0 feed. You can leave a response, or trackback from your own site.