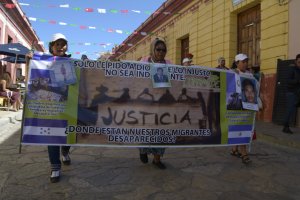 On 3 December, the “Bridges of Hope” Tenth Caravan of Central American Mothers passed through San Cristóbal de Las Casas.  From Guatemala, Honduras, El Salvador, and Nicaragua, the mothers are carrying out this journey on migrant routes to seek out their disappeared migrant children.  On their trajectory through 10 Mexican states, the caravan succeeded in reuniting 3 mothers with their families: one woman found her brother after 17 years, and two mothers found their children after 15 and 10 years, respectively.  In San Cristóbal a Mayan ceremony was held, in addition to a march during which the mothers demanded truth, justice, and respect for the human rights of migrants.  Furthermore, they denounced what is happening in Europe with migrants from Africa and the Middle East, and they expressed their solidarity with the 43 disappeared students from Ayotzinapa and their families: “Mexico is full of clandestine graves, but there are not just migrants there; instead they are full of Mexicans.  It is not just a question of 43.  There are many more who have been disappeared.”

The caravan has been supported by organizations based in San Cristóbal like Mesoamerican Voices – Action with Migrant Peoples and the Fray Bartolomé de Las Casas Center for Human Rights.  Though the Mexican government officially counts only 157 foreigners as disappeared, the civil organizations estimate at least 70,000 disappeared migrants in Mexico.  As the migrants traverse the country toward the end of arriving in the U.S., the criticism goes beyond just Mexican migratory policy: “the worst thing is that it is these same countries repressing migrants that have created the conditions for which there now is brutal forcible displacement in Central America.”