Chiapas: Close of the Global Festival for Anti-Capitalist Resistance and Rebellion 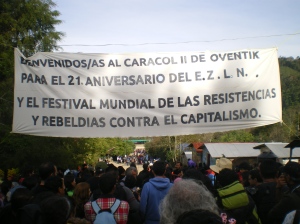 3 January 2015 marked the end of the First Global Festival for Anti-Capitalist Resistance and Rebellion: “Where those from above destroy, we from below rebuild.”  Organized by the National Indigenous Congress (CNI) and the Zapatista Army of National Liberation (EZLN), the Festival ended in San Cristóbal de las Casas, Chiapas, after having shared spaces in four Mexican states.

The events in Chiapas began in the Caracol II of Oventik, “Resistance and Rebellion for Humanity,” where 21 years since the Zapatista uprising of 1994 was celebrated on 31 December and 1 January.  Following speeches from family-members of the 43 disappeared students from the Raul Isidro Burgos Rural Normal School in Ayotzinapa, Guerrero, Subcomandante Insurgente Moisés read a communiqué and recalled that “only as organized peoples will we find the truth.  All that we want as people is what we have to build among ourselves.  It is in this way that the relatives of the murdered and disappeared students of Ayotzinapa are developing their search for justice and truth.”

Sup Moisés invited those assembled in Oventik to imagine “how a new society could be,” so that they began to struggle using “the example that the relatives of Ayotzinapa present us, that is, that it is better that we who suffer from this disease known as capitalism search each other out and meet.”  He stressed that “what is now most urgent is the truth and justice for Ayotzinapa,” given that “the most painful and indignant reality is that the 43 are not with us.”

Beyond this, Moisés individually embraced the group of relatives and students who were listening to his comments on stage: an embrace “of caring, respect, and admiration.”  Nor did he forget to name the 46 “absent” individuals, including the 3 students who were found on 27 September.

Lastly, on 2 and 3 January, the Festival ended with the sharing of conclusions, agreements, and pronunciations at the CIDECI-Unitierra.  Members of indigenous peoples of the CNI indicated that “we share this same pain that is called capitalism, [and we hope that] our path will be constant.”  One of the students from Ayotzinapa mentioned that “when we bid our farewells to Subcomandante Moisés, we told him that we also desire autonomy for our rural normal schools and […] we believe that with courage, dignity, and the determination of 43 families and thousands of people in the country and throughout the world, this and much more will be possible.  Many thanks.”

National: Inauguration of the First World Festival of Anti-Capitalist Resistance and Rebellion (30 December 2014)

Chiapas/Mexico: EZLN to cede its place to relatives and disappeared students of Ayotzinapa (19 December 2014)

Chiapas: New actions by the EZLN to support Ayotzinapa (26 October 2014)

National/International: Multiple mobilizations and marches for the “Pain” and “Rage” of Ayotzinapa (12 October 2014)

This entry was posted on Wednesday, January 21st, 2015 at 8:45 pm and is filed under Chiapas, Disappeared, EZLN, Guerrero, Human Rights, Human Rights Defenders, Indigenous people, Justice system, Land and Territory, Land rights, Mexico, Militarization, Oaxaca, Paramilitary, Political Prisoners/Prisoner of Conscience, torture, Women, Youth. You can follow any responses to this entry through the RSS 2.0 feed. You can leave a response, or trackback from your own site.