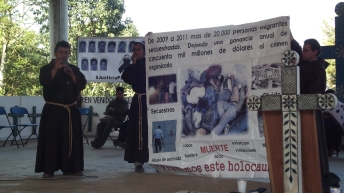 On 17 March, “La 72, Home and Refuge for Migrant People,” located in Tenosique, Tabasco, directed by the human-rights defender Fray Tomás González, released an Urgent Action (UA) due to events “that leave us absolutely indignant,” with reference to the death of a Honduran youth.  On 6 March, agents of the National Migration Institute (INM) working with federal police in Tenosique stopped a freight-train at the Chacamax station, 60 kilometers from Palenque, where they began a search.  Among the hundreds of persons traveling atop the train, the Honduran youth in question suffered a panic attack, jumped off the “Beastly” train, and entered the river, where he began to drown and then requested assistance.  In the end, the youth died.  According to the man who gave witness, the INM “agents said: ‘leave that fucker,'” as the UA claims.

In addition, the UA indicates that the migrants who had been witnesses “both of the savage raid as well as death of the youth and what followed [noted] that the persecution by the migration agents lasted more than 2 hours.  Once they saw that the youth was drowning, they withdrew and provided no assistance; the corpse remained for 10 hours on the river bank, cared for by the other migrants who witnessed the acts.  People from the local community also testified and told us of many crimes and human-rights violations that the INM agents commit.”

Lastly, the document ends with a call “on national and international human-rights organizations” to express themselves “in light of these lamentable acts and others that have been caused by the Southern Border Program.”

This entry was posted on Sunday, March 22nd, 2015 at 8:27 am and is filed under Disappeared, Human Rights, Human Rights Defenders, Indigenous people, Justice system, Land and Territory, Land rights, Press, religion, torture, Women, Youth. You can follow any responses to this entry through the RSS 2.0 feed. You can leave a response, or trackback from your own site.