Guerrero/National: 8 months after the forcible disappearance of the 43 students from the Rural Normal School of Ayotzinapa, there is no progress 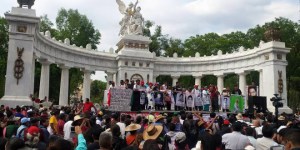 26 May 2015 marked 8 months since the forcible disappearance of the 43 students from the Rural Normal School of Ayotzinapa in Iguala, Guerrero. Relatives of the disappeared continue to declare that they will “neither forget nor forgive.” As on each 26 of every month, thousands organized themselves to protest and demand justice. Manifestations were held in small communities and large cities throughout Mexico and the world to demand the appearance with life of the 43 students.

In Mexico City, parents and those in solidarity marched from four points of the city, converging on the Zócalo. At the end of the march, protestors lit electoral propaganda on fire, leading to a confrontation between some of the dissidents and the police. This confrontation resulted in one arrest.

Two weeks before the elections, parents of the disappeared called on civil society not to vote in the 7 June elections. Felipe de la Cruz, spokesperson for the relatives, said, “We as parents have decided not to vote. We say no to the elections.” In a communique from the “Raúl Isidro Burgos” Rural Normal School of Ayotzinapa, current students shared that “beyond being well-known that the electoral process has been infiltrated by criminals who seek only to continue looting our country within this context of inequality, poverty, violence, lack of security, and illiteracy that dishonorably affects a large part of the Mexican populace, the political parties have victimized our people.”

Presently, the relatives are separated among different parts of the world. On 19 May 2015 the European solidarity caravan for Ayotzinapa ended after visiting 18 cities over 34 days, while on 28 May, the “Caravan 43 South America” arrived in Uruguay to “globalize resistance.” The “Caravan 43 South America” began on 16 May in Córdoba, Argentina, and will end on 12 June in Río de Janeiro, Brazil.

Guerrero/International: Eurocaravan for Ayotzinapa prohibited from protesting in front of Mexican embassy in Spain (7 June 2015)

Guerrero: Ayotzinapa – seven months of impunity and struggling for justice (3 May 2015)

Guerrero: IACHR experts confirm that the Ayotzinapa case is a forcible disappearance and a crime against humanity (10 April 2015)

This entry was posted on Tuesday, June 9th, 2015 at 9:02 am and is filed under Disappeared, Guerrero, Human Rights, Human Rights Defenders, Indigenous people, Justice system, Mexico, Militarization. You can follow any responses to this entry through the RSS 2.0 feed. You can leave a response, or trackback from your own site.