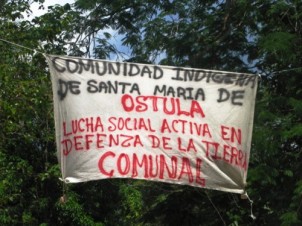 On 26 May, the Commission for the Defense of the Common Lands of Santa María Ostula, Aquila municipality, Michoacán, denounced that the day prior, it had suffered a new attack at the hands of the Knights Templar Cartel. It expressed that this represents “not only an alarm in terms of security, but also in terms of the very existence of our communal organization and ability to continue as a people.”

It warned that “newly, the Knights Templar Cartel is seeking to destroy our communal organization, for this attack coincides with the new actions taken by the community, beginning on 23 May, when a new agrarian order was consolidated in the recovered lands of Xayakalan.”

It should be noted that, though the Santa María Ostula community has organized itself to exercise its own forms of justice and self-defense, it has experienced harassment and attacks since 2009, when communards recovered approximately 1,300 hectares. It has also seen the consequences of mass-deforestation due to the operations of transnational corporations during 2012-2013.

The commission demanded respect for its communal police and the life and integrity of the general commander and coordinator of the self-defense units of the coastal and mountainous regions of Michoacán, Cemeí Verdía, as well as punishment of those responsible for the attacks on the community, and “respect for autonomy and lands belonging from time immemorial to the indigenous community of Santa María Ostula.”

This entry was posted on Wednesday, June 10th, 2015 at 9:44 am and is filed under Disappeared, Human Rights, Indigenous people, Justice system, Land and Territory, Land rights, Mexico, Militarization, Paramilitary. You can follow any responses to this entry through the RSS 2.0 feed. You can leave a response, or trackback from your own site.