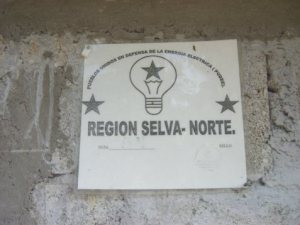 In a communique published on 21 June, the organization Peoples United for the Defense of Electricity (PUDEE) denounced that the Federal Electricity Commission (CFE) suspended service on 17 June to residents in 14 communities from the Tila municipality, northern zone of Chiapas. Some of the affected homes find themselves in a position of resistance to paying for electricity, due to high prices.

In light of these events, PUDEE has reported increased “tensions in the communities that struggle and resist to defend their rights” and that “amidst the situation and the rise in violence that could take place in the communities of the northern zone, we hold the three levels of government responsible.”

PUDEE indicated that “if it is this way that CFE will treat the communities in resistance, we will organize ourselves by means of the self-determination of our peoples. The way they are privatizing the electricity, we too will privatize our lands, and the CFE will have to pay us for the use of our lands. If this does not happen, they can take their light-posts and transformers. We will not allow them to plunder our land, which belonged to our parents and is for our children.”

Chiapas: PUDEE denounces “climate of violence” generated by the CFE in the zone below Tila (15 April 2013)

This entry was posted on Tuesday, June 30th, 2015 at 5:24 pm and is filed under Chiapas, Human Rights, Human Rights Defenders, Indigenous people, Justice system, Land and Territory, Land rights, Mexico. You can follow any responses to this entry through the RSS 2.0 feed. You can leave a response, or trackback from your own site.