Guerrero: Activists and artists demand the release of Nestora Salgado 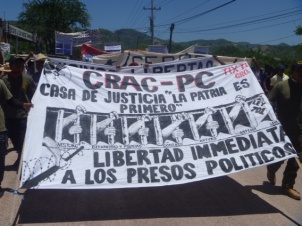 On 17 July, social collectives, artists, and activists protested at a political-cultural event in favor of the release of Nestora Salgado, commander of the Communal Police of Olinalá, Guerrero, who has been imprisoned for two years now. The event was held outside the Tetepan Center for Social Reinsertion, as organized by the “Women to Free Nestora” committee. As part of this activity, the concert “Let us open paths for liberation” was held, with the participation of several female rappers. Through music and rhythms, they pronounced themselves in favor of the release of Nestora, and against the criminalization of social struggles.

During the action, an audio message from Nestora was played, wherein she expressed gratitude for the support evinced at the action. In this way, she also called on the Guerrero state congress to support the Law on Amnesty, and she called on the Secretary for Governance and the United Nations High Commissioner in Mexico to follow her case. She stressed that she “wants to show that this incarceration is unjust. I have been imprisoned on false charges, these being crimes I never committed.” Lastly, she called on Mexican society to unite efforts to promote the liberty of political prisoners: “Only with your support will our freedom be assured.”

This entry was posted on Thursday, July 23rd, 2015 at 9:15 pm and is filed under Guerrero, Human Rights, Human Rights Defenders, Indigenous people, Justice system, Land and Territory, Land rights, Mexico, Militarization, Paramilitary, Political Prisoners/Prisoner of Conscience. You can follow any responses to this entry through the RSS 2.0 feed. You can leave a response, or trackback from your own site.