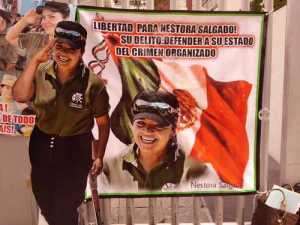 Nestora Salgado, the leader of the communal police in Guerrero who has been imprisoned since August 2013 and was transferred to the Tepepan prison on 29 May, announced that starting on 26 August she will begin a hunger strike lasting 43 days in length to express her solidarity with the disappeared students from Ayotzinapa. “This is a struggle for justice and respect toward the communal police who have not done more than the labor which the State has not been willing to guarantee: that is to say, our security.”

Two years after her imprisonment, Nestora Salgado calls on the citizenry to join the cause of liberty for political prisoners and the presentation with life of the disappeared.