Chiapas: Communiqué from the General Command of the EZLN on the 22nd anniversary “of the beginning of the war against oblivion” 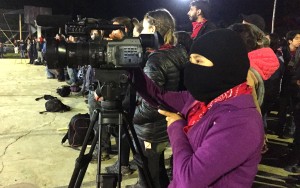 On January 1, 2016, during an event at Caracol II Resistance and Rebellion for Humanity, Oventic, a communiqué signed by the Clandestine Revolutionary Indigenous Committee – General Command of the Zapatista Army of National Liberation (EZLN), Subcomandante Insurgente Moisés and Subcomandante Insurgente Galeano was made available to the public. The communiqué was titled “Words of the EZLN on the 22nd anniversary of the beginning of the war against oblivion” and was read by Subcomandante Insurgente Moisés, who saluted the “compañeros and compañeras of the support bases of the Zapatista Army of National Liberation, insurgent compañeros/as of the militia, local and regional representatives, authorities of the three levels of autonomous government, compañeros/as promoters of the different fields of work, compañeros and compañeras of the National and International Sixth [La Sexta], and all those present.”

In the document they recalled ‘the beginning of the war against oblivion” which occurred “January 1, 1994, 22 years ago, we declared our ‘ENOUGH!’ that we prepared for a decade in dignified silence. […] Our battle flag was our 11 demands: land, work, food, health, education, dignified housing, independence, democracy, freedom, justice and peace. […] In this way we began our struggle against exploitation, marginalization, humiliation, disrespect, oblivion, and all the injustices we lived through caused by the bad system”, they continued.

They also reminded us that, “We were not alone. Nor are we now. In Mexico and the World dignity took to the streets and asked for space for the word.” They pointed out that there is “a war from above,” making reference to the “bad system” or “bad government,” a war that will continue “until we are exterminated. This is why instead of meeting our just demands it [bad government] prepared and prepares, made and makes war with modern weapons, it forms and finances paramilitary groups, it offers and distributes crumbs taking advantage of the ignorance and poverty of some.” Therefore, “In the midst of major threats, military and paramilitary harassment, constant provocations from the bad government, we began to form our own system of governing, our autonomy, with our own education, our own healthcare, our own communication, our way of caring for and working on our mother earth; our own politics as a people and our own ideology of how we want to live as peoples, with another culture.”

They added that, “We are people with dignity, determination and awareness to fight for true freedom and justice for all. Regardless of one’s color, race, gender, beliefs, calendar or geography.” They also admitted that, “not only are the Zapatista communities better off than they were 22 years ago. Their standard of living is better than those who sold out to the political parties of every hue. […] Of course, we recognize that we still have a lot to do, we need to organize more and better.” They analyzed the path of collective construction in which they learned “as Zapatistas, that this is only possible with organization. We learned that it is good if someone is indignant. If many become indignant, a light switches on in a corner of the world and for a few moments it illuminates the entire surface of the earth. But we also learned that if these indignations organize themselves…Ah! Then it is not only a momentary light that illuminates the paths of the earth.” They concluded that, ‘we must unite more, we need to organize better to build our boat, our house, that is, our autonomy, because that is what is going to save us from the great storm that looms. We should strengthen our fields of work and our collective work.”

For a full version of the communiqué in English:

WORDS OF THE EZLN ON THE 22ND ANNIVERSARY OF THE BEGINNING OF THE WAR AGAINST OBLIVION (Enlace Zapatista, January 2, 2016)

For more in formation (in Spanish):

For more information (from SIPAZ):