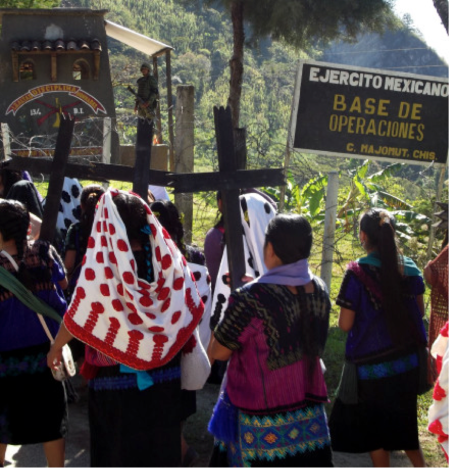 On May 22nd, 19 years and five months after the Acteal massacre, Las Abejas de Acteal Civil Society Organization issued a statement to recall that impunity continues and to continue to demand justice, as it has done without stopping for almost 20 years.

They also denounced the situation of violence, “more rampant than ever,” in which Mexico is today. They also remembered journalist Javier Valdez, murdered on May 15th for criticizing and telling the truth “about dirty politics and crimes committed by bad governments and organized crime.”

They pointed out the lack of resources and supplies in hospitals in Chiapas “while with the bad government of Velasco Coello, millions of pesos are spent on advertising, on welfare programs to divide communities and buy consciences and even finance the purchase of arms for paramilitary groups. There is no money for life and health but there is money for death and lies.” They warned that paramilitarism has been reactivated in the same municipality of Chenalho.

Las Abejas de Acteal Civil Society Organization concluded its statement recalling that its almost 25-year struggle “is peaceful and non-violent against injustice and exploitation of the bad government of PRI, PAN, green ecologists, PRD and other political party followers.”

This entry was posted on Tuesday, June 6th, 2017 at 3:57 pm and is filed under Acteal, Chiapas, Human Rights, Human Rights Defenders, impunity, Indigenous people, Justice system, Las Abejas, Mexico, Uncategorized, Women. You can follow any responses to this entry through the RSS 2.0 feed. You can leave a response, or trackback from your own site.