Chiapas: The Councils of the Community Government from the Municipalities of Chilón and Sitalá are presented publicy 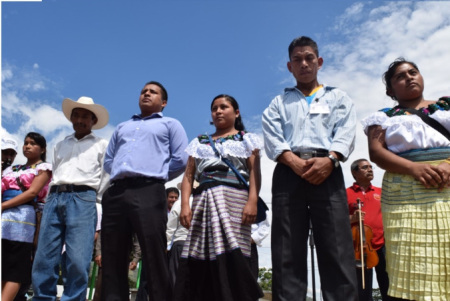 On April 20, the Movement in Defense of Life and Territory (MODEVITE) presented the Council of Spokesmen of the Community Government of Chilón, elected in 20 regions of the municipality through the System of Uses and Customs. He explained that this Council “will be spreading the word in our communities about this alternative organization that seeks to resist the system of election by political parties and recover the indigenous constitutional right to self-determination, through the election of the Municipal Authorities according to our Indigenous Normative System, which allows us to exercise our own mode of government “.

More than 4000 people attended the event held in Bachajón “to ratify the path we have undertaken for several years, and through this demonstration, we tell the Mexican State and its Institutions that our organized struggle continues and that these Spokespeople will walk to unite and give more strength to our people ».

The next day, the same thing was done in the neighboring municipality of Sitalá. The MODEVITE stressed that “without refreshments, food or passage fees more than a thousand people met with a single slogan” not only do we seek new leaders, but a different way of governing “».

The MODEVITE explained that the more than 60 communities that filed the request with the Institute of Elections and Citizen Participation (IEPC) with more than 3,000 signatures of support, will be visited by the spokespersons and promoters of Community Government, “to continue building this different form of government despite the fact that until now the electoral institutions have not favored our request, as reported by the sentence of April 6 of this year, by the Electoral Court of the State of Chiapas. Therefore, the presentation of these comrades as well as the interposition of a new trial for the protection of political and electoral rights before the Regional Chamber of the Electoral Tribunal, is a visible argument that we wish to continue in our struggle, with more force and with the support of more and more sisters and brothers ».

For more information from SIPAZ :

This entry was posted on Wednesday, May 30th, 2018 at 11:51 am and is filed under Chiapas, Elections, Human Rights, Indigenous people, Land and Territory, Uncategorized. You can follow any responses to this entry through the RSS 2.0 feed. You can leave a response, or trackback from your own site.