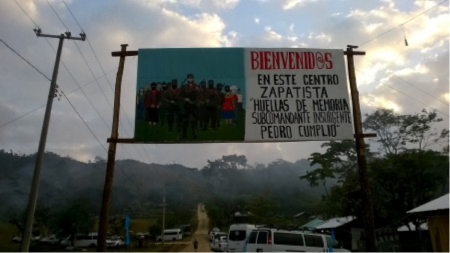 On December 31st, within the framework of the 25th anniversary of the armed uprising, the Zapatista Army of National Liberation (EZLN in its Spanish acronym) announced from the Caracol de La Realidad, in the Lacandon Jungle, border region, that it will oppose several of the plans “of destruction” of the new president Andres Manuel Lopez Obrador (AMLO), including the massive planting of trees in several states, including Chiapas, the Maya Train, the Isthmus of Tehuantepec Project (Oaxaca) or the National Guard (which would prolong the military presence in public security work as has been pointed out by national and international human rights organizations): “As much as they try to humiliate us with the repressive forces such as the National Guard, we will not rest in defending our Mother Earth because in her we were born, in her we live and in her we will die. We will not surrender, we will not sell out and we will not give up.” “Let us fight. We are going to confront, we are not going to allow (Lopez Obrador) to pass his destruction projects here. We are not afraid of his National Guard, who changed its name, so as not to say Army”, Sub-commander Moises said.

“We tell him that we do not believe him”, he added, describing AMLO as “tricky” and “crafty” for wanting to pretend to be with the original peoples of Mexico when, in fact, he said, he seeks to “destroy them.”

Although during the five days prior to the anniversary, the EZLN held a meeting with members of the National Indigenous Council (CNI in its Spanish acronym), the Indigenous Council of Government and solidarity groups, it said that for 25 years “we have seen that we are alone; what we have achieved has been with our work and effort, with our mistakes. (…) We went to awaken, we went to tell the poor people of Mexico, of the countryside and the city. Many did not pay attention to us, some are organizing themselves, and we hope they continue yo organize. But we see that most did not listen to us. But we did the work, and we have more to do. (…) People come and go from outside. We continue here. Each time they come as tourists, but misery, inequality and injustice are not for tourism. The young people of Mexico will continue to die. What a pity that they pay attention to someone who is there deceiving the people.”

He finished his statement emphasizing: “we are going to defend what we have built. (…) The change we want is that one day the people, women and men are those who have to decide how they want their life, not that a group decides the lives of millions of human beings. We say it only with these words: the people rule, and the government obeys. That is why we say: here we are, we are the Zapatista Army of National Liberation, and here we will continue!”

President Andres Manuel Lopez Obrador affirmed that he will not fall into “any provocation” from the Zapatista movement: “Even if they want to confront us, there will be no response. (…) I express my respect for their plans, programs and decisions. We live in a free country, there is no repression and there is no censorship,” he said.

Chiapas: Meeting of CIG Support Networks, COMPARTE 2018 “For Life and Liberty” and 15th Anniversary of the Zapatista Caracoles (August 22nd, 2018)

This entry was posted on Monday, January 14th, 2019 at 7:05 pm and is filed under Chiapas, CNI, EZLN, Indigenous people, Land and Territory, megaprojects, Mexico, Militarization, National Indigenous Congress, Uncategorized, Zapatista Army for National Liberation. You can follow any responses to this entry through the RSS 2.0 feed. You can leave a response, or trackback from your own site.