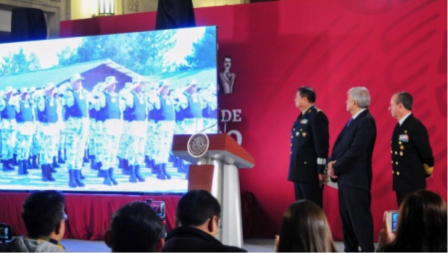 Since January 8th, public hearings or consultation forums were initiated in the Chamber of Deputies in which governors, mayors, legislators, public servants on security and armed forces issues, specialists, representatives of human rights organizations and civil society organizations will participate to discuss the creation of the National Guard. Discussion tables are planned until January 12th, which will address issues such as “citizen security in the states, federalism and the National Guard, municipal strategies for security, human rights, human security and the construction of peace.”

On the same day, the #SeguridadSinGuerra collective, which brings together more than 300 organizations and individuals, published a public stance in which it maintained its critical position towards the formation of the National Guard that continues with the tendency to militarize the country. It also criticized the recent call of the federal government for the recruitment of those who will make up that institution: “If times have really changed and those who today govern and legislate are different, you cannot act in the same way, using the Congress of the Union as a window of procedure,” they stated.

It should be recalled that shortly before, President Andres Manuel Lopez Obrador (AMLO), launched the call to recruit young people to join the National Guard, which generated controversy as he took this step before the creation of this new institution was approved in Congress. In his defense, AMLO declared that the objective is “not to waste time” but opposition legislators described this initiative as a “lack of respect” for the legislative branch.

National: AMLO “The Army and the Navy will continue on the streets in internal public security tasks” (September 15th, 2015)

This entry was posted on Tuesday, January 15th, 2019 at 11:49 pm and is filed under Human Rights, Justice system, Mexico, Militarization, Uncategorized. You can follow any responses to this entry through the RSS 2.0 feed. You can leave a response, or trackback from your own site.