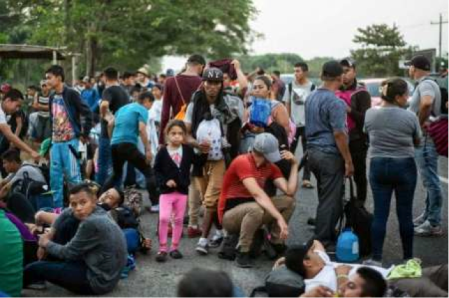 The CNDH requested the INM to provide urgent attention and assistance to the people housed in the EMSXXI where “a population of over 2,000 people was reported, which represents more than 200% of its capacity, which is for 960 people. To ensure a dignified stay with full respect for their human rights (…) it is also necessary to channel people in the context of migration to different migratory stations to reduce overpopulation, streamline administrative procedures of the people accommodated, explore alternatives in detention, mainly of people in situations of vulnerability and of applicants for refugee status, as long as the procedure is determined, to provide clear, accurate and sufficient information about deadlines and possible resolutions to those who initiated migratory procedures. Likewise, it is requested that in the EMSXXI there be sufficient medical personnel in all the schedules and specialists in pediatrics given the high number of minors.”

In the municipality of Mapastepec the CNDH documented that there are more than 3,000 migrants and that “the former were already registered, although the procedure has not been determined, prompting anger in some of them who said they had been duped by immigration agents who informed them that their procedures can last between 15 days, two or even six months, so the lack of specific information motivated a violent protest causing the Federal Police to intervene.”

Regarding migrants from Cuba, it was observed “that the majority has resorted to lawyers and managers to process injunction proceedings to avoid their deportation; however, the CNDH also learned that, as the same protection does not have effects that allow transit through Mexican territory, some decided to continue on their way to the United States of America, but several of these were assured by immigration agents and conducted to the United States to various migratory enclosures, including the EMSXXI itself. In the interviews that personnel of the CNDH made with those of Cuban nationality, they expressed their desire to desist from the injunction and to request Mexico’s recognition of refugee status.”

This entry was posted on Wednesday, May 8th, 2019 at 5:56 pm and is filed under Chiapas, Human Rights, Human Rights Defenders, International, Mexico, Migration, Uncategorized. You can follow any responses to this entry through the RSS 2.0 feed. You can leave a response, or trackback from your own site.