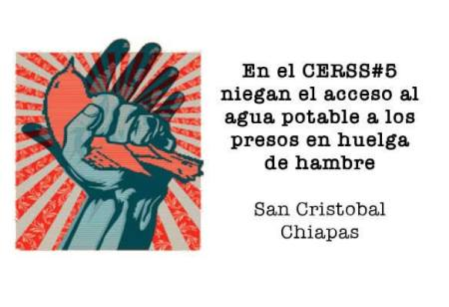 Prisoners, victims of torture and cruel treatment in Chiapas, have already spent more than 100 days on hunger strike since they began their demand for justice and their freedom.

Adrian Gomez Ruiz, Juan de la Cruz Ruiz, Abraham Lopez Montejo and German Lopez Montejo, are on hunger strike at the State Center for the Social Reintegration of the Sentenced (CERSS in its Spanish acronym) No. 5, in San Cristobal de Las Casas; and Marcelino Ruiz Gomez in the CERSS No. 10, in Comitan de Dominguez. All of them have denounced violations of their human rights, inter alia, for torture and cruel, inhuman and/or degrading treatment during their detention and deprivation of liberty.

On several occasions these prisoners have reported omission and negligence in the care of their health, which is the responsibility of the Mexican State as they are in custody. On June 20th, 2019, it was reported that they are denied the right to immediate access to drinking water. Due to the above, they manifest liver and kidney problems, which represent a serious and progressive deterioration in their physical and emotional health, exacerbated by being on hunger strike.

They reported that the government of the state of Chiapas has not adequately and promptly resolved their request for freedom, so despite the deterioration in their health they have decided to continue their hunger strike.

In a document published on June 25th, 2019, the Fray Bartolome de Las Casas Center for Human Rights, the relatives of the prisoners and the Working Group No EStamos Todxs demanded that the Government provide adequate medical attention that guarantees the right to health of the five prisoners. They urged it to immediately resolve their request for freedom due to the violations of their human rights committed during their detention and in their legal proceedings.

Little Progress 60 Days after Start of Hunger Strike in Various Sate Prisons (May 15, 2019)

This entry was posted on Thursday, June 27th, 2019 at 10:16 pm and is filed under Arbitrary arrests, Centro de Derechos Humanos Fray Bartolomé de las Casas, Chiapas, Human Rights, Human Rights Defenders, Indigenous people, Justice system, Mexico, Political Prisoners/Prisoner of Conscience, torture, Uncategorized. You can follow any responses to this entry through the RSS 2.0 feed. You can leave a response, or trackback from your own site.