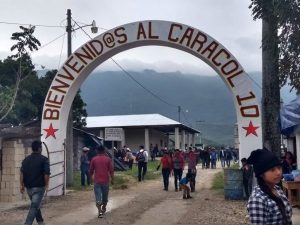 On February 2nd, the inauguration of two new caracoles, centers of the autonomous governments of the EZLN, was celebrated in the Lacandon Jungle area in Chiapas. It was attended by several leaders, including the insurgent Subcommander Galeano (formerly Marcos).

The inaugurated government centers are Caracol 8 “The light that shines on the world”, in the Dolores Hidalgo community; and Caracol 10 “Blooming the Rebel Seed”, in the Patria Nueva community, both in the municipality of Ocosingo.

In August 2019, in a statement, the EZLN had announced the creation of 11 new caracoles and Zapatista Autonomous Resistance and Rebellion Centers (CRAREZ), each with its Good Government Board structures and infrastructure for mass meetings, schools and offices.

The inauguration was celebrated with a deployment of its military forces and with cultural and sports activities.

“As the bases of the EZLN, we are working on autonomy, and this is the creation of caracoles as will happen in other places and not only here. All the Zapatista peoples are celebrating, we are happy, we are celebrating this birth. Here will be the offices where the compañeros will be working for the next three years”, they said in relation to the process of strengthening their regional forms.

This entry was posted on Tuesday, February 4th, 2020 at 10:07 pm and is filed under Chiapas, EZLN, Indigenous people, Land and Territory, Mexico, Uncategorized, Zapatista Army for National Liberation. You can follow any responses to this entry through the RSS 2.0 feed. You can leave a response, or trackback from your own site.