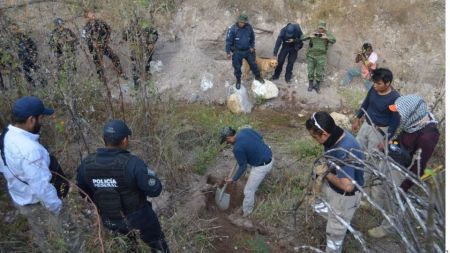 On January 3rd, a four-day search process for missing persons in began the region around Tlapa de Comonfort in Montaña Guerrero.

On the same day, more than 20 families of missing persons accompanied by the Montaña Tlachinollan Human Rights Center met with the National Search Commissioner, Karla Quintana. Also in attendance were Beatriz Alfonso, representative of the Inter-American Commission on Human Rights (IACHR), and Misael Rojas, representing the Undersecretary of Human Rights, Alejando Encinas.

The families expressed the need to involve the State Attorney General’s Office as well as the National Search Commission, in order to move forward in the cases of their relatives.

The search will be carried out in 16 locations in the Montaña region. Elements of the National Guard and the National Defense Secretariat (SEDENA), the National Search Commission, and the Prosecutor of the State of Guerrero will participate in the process.

Karla Quintana highlighted the will of the federal government to continue looking for the disappeared; “In this third search we are going to coordinate with families, civil society organizations.” She also praised families for continuing to denounce, despite the risks that might entail.

For its part, Tlachinolan opined that “the search for the disappeared in Montaña is important in order to identify the pattern of macrocriminality, as well as advances in research. However, another fundamental element is the rapid identification of the human remains that have been found in Tlapa so that families can have answers to their pain and begin their grieving processes. In a context of violence, you cannot put yourself at risk or criminalize the victims of disappearance. The families that have been organized today had been silenced and ignored for years by indolent authorities because of their demands. Impunity and complicity between organized crime groups and the authorities has been a tragedy.”

This entry was posted on Wednesday, February 5th, 2020 at 9:27 am and is filed under Uncategorized. You can follow any responses to this entry through the RSS 2.0 feed. You can leave a response, or trackback from your own site.