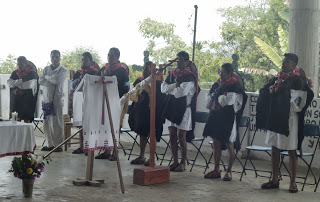 On February 22nd, within the framework of the monthly anniversary of the Acteal massacre (1997), Las Abejas Civil Society issued a statement in which it denounced not only impunity in that case but that “in Mexico of the era of the “Fourth transformation “human rights defenders, protectors of Mother Earth are persecuted and murdered, the truth is still covered up and women and girls are murdered, just as the criminal governments of the PRI and the PAN did.”

It also stated that “if we had a premature conscience, we would swallow the tale of the MORENA president that uncontrollable violence in the country, femicides, kidnapping and murder of girls is the fault of previous governments. It is outrageous that this president does not have the decency to admit that once he assumed power in Mexico, he assumed to serve a rotten system of government that can only persist causing destruction and feeding on blood.”

It outlined several more recent cases, also stating that “every day there is news of murders that make the news of the previous day remain forgotten, taking away from the fact that there is a new woman or girl murdered and raped.” It mentioned the case the repression against the fathers and mothers of the 43 disappeared students of Ayotzinapa, during their visit to the Mactumatza Normal Rural school in Chiapas; the detention of Miguel Lopez Vega, delegate of the National Indigenous Congress, member of the Zacatepec community radio station and member of the Puebla Peoples in Defense of the Land and Water Front, Morelos and Tlaxcala (although he was released through social pressure, Las Abejas believe that it was to intimidate the movement against companies in the Huejotzingo Industrial corridor) and femicides; among others.

Chiapas: “This year begins with a lot of violence and it is increasing” – Las Abejas de Acteal Civil Society (January 28, 2020)

This entry was posted on Tuesday, February 25th, 2020 at 10:55 pm and is filed under AMLO, Arbitrary arrests, Ayotzinapa, Chiapas, CNI, criminalisation of social protest, Disappeared, femicidess, Guerrero, Human Rights, Human Rights Defenders, impunity, Indigenous people, Justice system, Land and Territory, Las Abejas, megaprojects, Mexico, National Indigenous Congress, Uncategorized, Women. You can follow any responses to this entry through the RSS 2.0 feed. You can leave a response, or trackback from your own site.