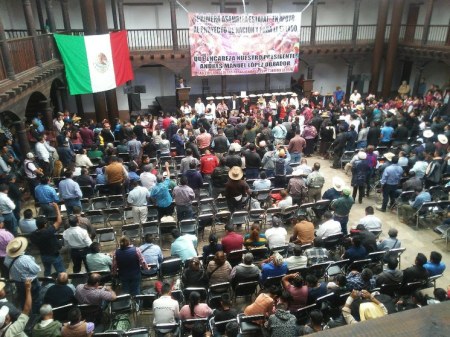 On February 22nd, more than 700 people gathered in what they called the First State Assembly in support of the nation and state project headed by President Andres Manuel Lopez Obrador at the Casa Mazariegos convention center in San Cristobal de Las Casas. As reported, the participants included “representatives of all indigenous ethnic groups (Tzeltal, Tzotzil, Tojolabal, Chol and Lacandon, among others) and Afro-Mexicans from Chiapas, religions, campesinos, social leaders of the different ideological currents of the state, entrepreneurs, free thinkers and citizens.”

The act began with an indigenous ceremony led by a speaker of the Mam language and then a statement signed by the group “Chiapanecos for Peace and Development” was read, first in Spanish and then in the indigenous languages ​​represented in the meeting.

They expressed their “total and unconditional support for all social programs and projects such as the Dos Bocas refinery, the Trans-Isthmus Corridor, the Maya Train and the long-awaited Pijijiapan-Palenque road section, which as a whole will, without a doubt, achieve the development that our state longs for and deserves so much, since, as it has always said, for the good of all, first for those who have less through the construction of the Palenque-San Cristobal-Pijijiapan highway.”

Finally, they invited the President to “on the date he decides be an honorary witness of a work group in which all those convinced in Chiapas will smoke the pipe of peace and sign the social reconciliation and pacification of our beloved state.”

National: EZLN and CNI Hold Events on the First Anniversary of the Murder Samir Flores (February 25, 2020)

Chiapas/Mexico: EZLN, CNI and CIG Convene Actions in Defense of Territory and Mother Earth “We Are All Samir” (January 14, 2020)

This entry was posted on Friday, February 28th, 2020 at 6:46 pm and is filed under Afro-Mexican, AMLO, Chiapas, Indigenous people, Maya Train, megaprojects, Mexico, Mining, Uncategorized. You can follow any responses to this entry through the RSS 2.0 feed. You can leave a response, or trackback from your own site.