National: Reform Of Law for Protection of Human Rights Defenders and Journalists Debated in Context of Greater Vulnerability in Pandemic 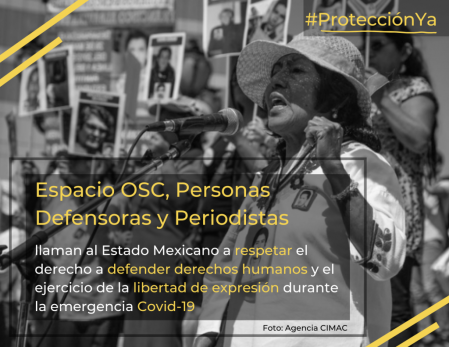 On May 20th, a controversial initiative was proposed to the Permanent Commission by the MORENA deputies that proposes to abolish 44 trusts, related to support for the Mexican film industry, agriculture, science and technology, national sports, and energy sector contractors and suppliers among others. It proposes to modify 14 legal systems, among them the Law for the Protection of Human Rights Defenders and Journalists.

Given this, former members of the Governing Board and the Advisory Council of the Protection Mechanism for both sectors warned of the fact that “it intends to disappear all those measures and locks that allow the management of resources through the trust to be transparent, with supervision of a collegiate body and with the active participation of a representative of civil society or academia.” “The Protection Mechanism (…) must be strengthened not weakened,” they declared. “Legislative measures to modify the regulatory framework that regulates the Mechanism are not necessary. What is urgent is the generation of a comprehensive public policy of protection that coordinates ordinary state scaffolding, until now ignored, which should guarantee that journalists and defenders can do their daily work in safety”, they stressed. “Although the operation of the Mechanism has had great vicissitudes, the trust has guaranteed that the lives of hundreds of defenders and journalists were protected in the last seven years,” they recalled.

Putting these figures in context, it indicated that “according to the annual report of the Mechanism, in 2019 a total of 295 attacks were registered, on average 24.5 attacks per month, which implies that in the context of a health crisis the attacks have doubled.”

The CSOs expressed their concern about the fact that “the Head of the Executive continues to use a discourse that discredits the role of the media and journalistic work. These statements contribute to creating a hostile environment against those who practice journalism and the media, and to that extent can undermine freedom of expression.” They noted that in several states the imposition of measures that restrict and hinder freedom of transit and association, such as curfews, “have a negative impact on the work of defense of human rights and freedom of expression.” They called to “strengthen the work of the Mechanism.”

For its part, Red Todos los Derechos para Todas y Todas (Red TdT – Rights for All Network)) also stressed that in the case of the homicides of defenders, “two of these murders were in the homes of human rights defenders, which shows the increase in vulnerability to the health crisis due to COVID-19.” It also highlighted that of the four, “the work of three of these people was linked to the defense of land and territory, which is consistent with the trend that has been pointed out by the Red TdT and other organizations. With these four murders, there would already be 30 defenders killed during the six-year term of Andres Manuel Lopez Obrador.”

They also warned about the fact that “in the framework of the health contingency, it is clear that the work of defending human rights does not stop, but becomes especially relevant at a time when institutional absences become multiple windows of opportunity for the commission of crimes and human rights violations.”

This entry was posted on Tuesday, May 26th, 2020 at 7:00 pm and is filed under AMLO, Coronavirus, COVID-19, Guerrero, Human Rights, Human Rights Defenders, impunity, journalists, Justice system, Land and Territory, Mexico, Uncategorized. You can follow any responses to this entry through the RSS 2.0 feed. You can leave a response, or trackback from your own site.